Books On Vaishnavism And Vaishnava Tradition 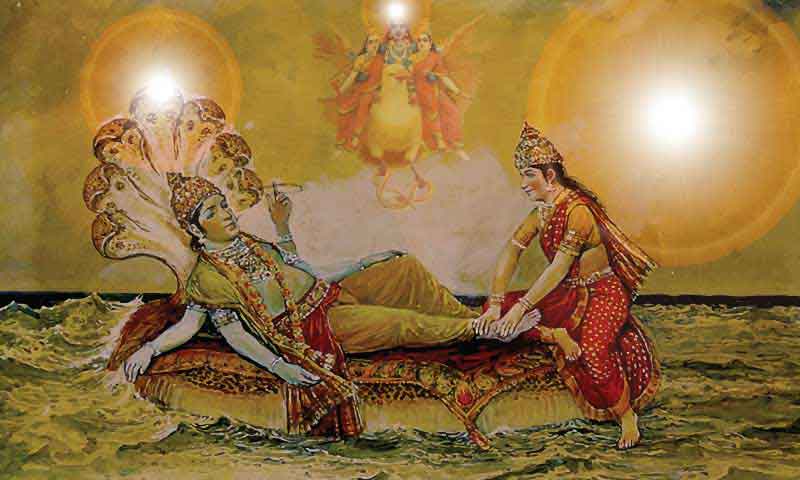 Find here a list of selected books on Vaishnava Sampradaya or Vaishnavism, Lord Vishnu, Incarnations of Vishnu, and Significance of Vaishnava bhakti tradition..

Books on Vaishnavism by Category

The Bhagavadgita Complete Translation by Jayaram V With Text and Commentary

Singing the Body of God: The Hymns of Vedantadesika in Their South Indian Tradition - Steven Paul Hopkins

Seeing Through Texts: Doing Theology Among the Srivaisnavas of South India (Suny Series, Toward a Comparative Philosophy of Religions) - Francis X. Clooney

The Path of Grace: Social Organization and Temple Worship in a Vaishnava Sect (Studies in Sociology and Social Anthropology) - Peter Bennett

Chaitanya and the Vaishnava Poets of Bengal - Webster's

Chaitanya and the Vaishnava Poets of Bengal - John Beames

Chaitanya and the Vaishnava Poets of Bengal

The Waves at Jagannatha Puri and Other Poems - Satsvarupa Dasa Gosvami

Vedanta-Vajravali: Lightning Bolts of Vedanta : A Summary Study of the Vedanta-Sutra in 108 Texts; With the Original Sanskrit Text, Roman Translitera - Badarayana.

The Book of Vishnu - Nandita Krishna

The Vishnu Purana, Book 2 of 6: A System of Hindu Mythology and Tradition (Forgotten Books)

The Vishnu Purana, Book 5 of 6: A System of Hindu Mythology and Tradition (Forgotten Books)

The Vishnu Purana, Book 4 of 6: A System of Hindu Mythology and Tradition (Forgotten Books)

The Vishnu Purana, Book 6 of 6: A System of Hindu Mythology and Tradition (Forgotten Books)

The Vishnu Purana, Book 1 of 6: A System of Hindu Mythology and Tradition (Forgotten Books)

The Vishnu Purana, Book 3 of 6: A System of Hindu Mythology and Tradition (Forgotten Books) - Unknown

The God Within: A Testament of Vishnu (A Handbook for Spiritual Renaissance) - Elwood Babbitt

Hymns for the drowning: Poems for Visnu (Princeton library of Asian translations) - Nammalvar

Singing the Body of God: The Hymns of Vedantadesika in Their South Indian Tradition - Steven Paul Hopkins

Vishnu Sahasranama with the Bhasya of Sankaracharya - R. Ananthakrishna Sastry

The Buddhist Visnu: Religious Transformation, Politics, and Culture (Paperback) This title is not about the exotic land itself, but rather the hidden glory of Vaishnavism. It may not be the most well-known form of Hinduism but it is India's richest and most significant religious tradition. This book focuses on the Vaishnava tradition and its contemporary manifestations.

Easy Journey to Other Planets This book sets out to discuss and prove that Vedic swamis have been travelling to other planets for thousands of years through meditation. They are not embarking on a mental journeys but are actually physically travelling to other planets. As all of Prabhupada's other works, this one is completely engrossing and highly recommended. - P. C. Allen  (Colorado)

Krsna Consciousness: The Matchless Gift The message of this book is summed up in the paragraph: "Modern civilization is in dire need of an educational system to give people instructions on what happens after death. In actuality the present educational system is most defective because unless one knows what happens after death, one dies like an animal. An animal does not know that he is subject to death or that he is going to have another body. Human life, however, should be more elevated. One should not simply be interested in the animalistic functions of eating, sleeping, defending and mating. A living entity may have abundant supply of food for eating, or many nice buildings for sleeping, or good arrangements for sex life, or a good defense to protect him, but this does not mean that he is a human being. A civilization that is based on these activities should be known as animalistic. Since animals are also interested in these functions, what is the difference between human life and animal life if a human being does not go beyond them? The distinction can be made when the human being becomes inquisitive and asks 'Why have I been put into this miserable condition? Is there any remedy for it? Is there perpetual eternal life? I do not want to suffer. I want to live happily and peacefully. Is there any chance for this? What is the method or science by which this can be achieved?' When these questions are asked, and steps have been taken to answer them, our human civilization is the result." The answers to these questions are to be found in this book - DAVID-LEONARD WILLIS

Vaishnava Viewpoint: Journey to Ecstasy A three-part glimpse into the Vaishnava devotional world, comprised of 1.) the philosophical basis of bhakti yoga, 2.) an autobiography of a practitioner culminating in an encounter with the Divine, 3.) commentaries on current topics and the benefits of Vaishnavism compared with other religious systems.

The Book of Vishnu Vishnu, the Supreme Being, is the preserver, the protector of the good and the guardian of dharma. Seated on Adi Shesha, the many-hooded serpent, in the primeval waters, he watches over his devotees and rewards the pious. And whenever dharma is in danger, he incarnates himself on earth to rid it of evil. Beginning with an investigation of the possible non-Vedic, Dravidian origins of Vishnu, this book describes his form, aspects and attributes, and his avatars or incarnations: Matsya, the fish; Kurma, the tortoise; Varaha, the boar; Narasimha, the man-lion; Vamana, the dwarf; Parashurama; Rama; Krishna; and Kalki, the final destroyer. Combining the skill of a storyteller with the insight of a scholar, Nanditha Krishna has brought to glorious life perhaps the most powerful and revered god in the Hindu pantheon. An art historian, Nanditha Krishna is the director of the C.P. Ramaswami Aiyar Foundation at Chennai. Her books include The Art and Iconography of Vishnu-Narayana; Manuscript Paintings of the Sarasvati Mahal Library, Tanjore and Ganesha: The Auspicious...The Beginning (with her mother, Shakuntala Jagannathan).

The Book of Krishna Of all Vishnu's avatars, Krishna is regarded as the purna avatar, the complete incarnation, for he encapsulates in himself the entire gamut of emotions and attributes that constitute the ideal human personality. He is the most accessible of gods, and bridges the gap between the mortal and the immortal. In this book, Pavan Varma, the best-selling author of Krishna: The Playful Divine, succeeds brilliantly in communicating the exuberance, the charm and the complexity of this popular deity. Drawing upon the Puranas, classical literature, bhakti poetry and folklore, he has painted a rich and varied portrait of the blue god-as the delightfully mischievous child, the uninhibited lover, the formidable warrior, the wise and pragmatic philosopher, and the Supreme God.

The Buddhist Visnu: Religious Transformation, Politics, and Culture This is a scholarly but eminently readable and accessible study of the multilayered resonance of Sri Lankan culture... Highly Recommended." -- Choice "John Holt's book is an impressive work of scholarship." -- Journal of the Royal Asiatic Soceity