Websites on the History of India and Hinduism 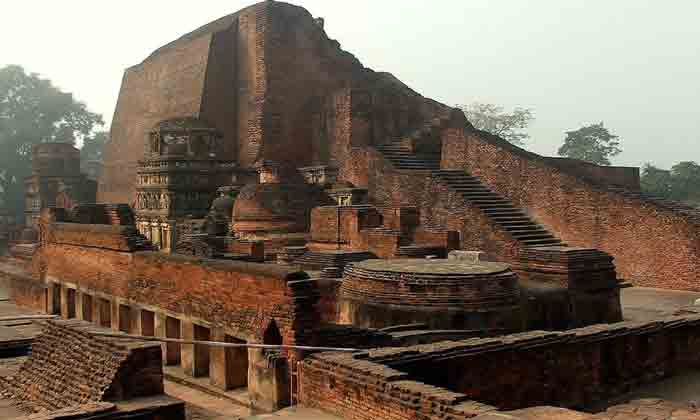 Nalanda, one of the oldest universities in the world

The history of ancient India is like an abstract painting with a few dots here and there and a few daubs of paintings. Historians look at them and draw their own conclusions. There is not much reliable information about India’s past, which clearly tell us what really happened. The scriptures are useful to reconstruct its past, but they are not very reliable. Here we have included a few links about the history of India with specific reference to Hinduism and Hindu culture.

India is home to some of the oldest proto human settlements which may date back to 500,000 years. Isolated remains of Homo erectus were found at Hathnora in the Narmada Valley in central India which suggest that earlier human species might have lived in the subcontinent long before the Neolithic human settlements, which appeared about 12,000 years ago, at the end of the last Ice Age in parts of Madhya Pradesh and Bihar. The Bronze Age settlements began at the beginning of the Indus Valley civilization about 3500 BC.

It was followed by the Sindhu-Saraswathi Civilization, which appeared during the Iron Age about 2500 BC. Both civilizations covered a wide geographical area from western borders of Afghanistan to the Narmada Valley in the South and the Himalayas in the North. It was followed by the appearance of several urban centers in the Gangetic Valley, formation of large kingdoms and empires, republics and diverse cultures. The rise of the Magadhan dynasties, starting with the Nandas, witnessed the flourishing of several ascetic, shramanic, and religious traditions including the birth of Buddhism and the popularity of Vedism and Jainism. It is difficult to say when the actual history of Hinduism began, because it has many sources some of which may date back to prehistoric cultures that flourished in the Indian subcontinent which are not part of its folk and tribal traditions.

By the first century AD, India was a well developed, advanced civilization, compared to many civilizations in other parts of the world. In its long history, India faced numerous challenges. So did Hinduism and its sects and schools of philosophy. From then on until the advent of the British, India witnessed the rise and fall of numerous dynasties and an expansive growth of many languages, sub cultures and vernacular literature.

Prominent among the dynasties which established their sway in the subcontinent were the Mauryas, the Sungas, the Satavahanas, the Kushanas, the Barashivas, the Guptas, the Cholas, Chalukyas, Ikshvakus, Sakas, Pratiharas, etc. They were followed by several Muslim dynasties and the Mughals. The history of India is intricately associated with the history of Hinduism, Buddhism and Jainism. The following links provide comprehensive information on the history of India with specific reference to Hinduism and Hindu culture.

Essays on History at Hinduwebsite.com

All About Harappa and Indus Valley Civilization

Manas: History and Politics of India

The History of Religion in India : Vedism and Hinduism

Itihas, the history of India

The Essentials of Hindutva

An Outline of the History of Kashmir

History of the Ancient Aryans: Outlined in Zoroastrian scriptures.

Manas: History and Politics of India

Kamat's Potpourri -- The History, Mystery, and Diversity of India

Hindu History - The Emergence of the Caste System

How Kashmiri Pandits ruled over Kabul?

An Outline of Jain History

The Mughal Empire From Babar To Aurangzeb - Full Text

Manas: India and Its Neighbors

Disclaimer: The following are links to the History of Hinduism and related subjects. Since they are third-party links we do not have any control over them and we cannot guarantee their accuracy or their authenticity. These links are being provided as a convenience and for informational purposes only; they do not constitute an endorsement or an approval by Hinduwebsite.com of any of the products, services or opinions of the corporation or organization or individual. Hinduwebsite.com bears no responsibility for the accuracy, legality or content of the external site or for that of subsequent links. Contact the external site for answers to questions regarding its content