Swami Paramananda On the Upanishads 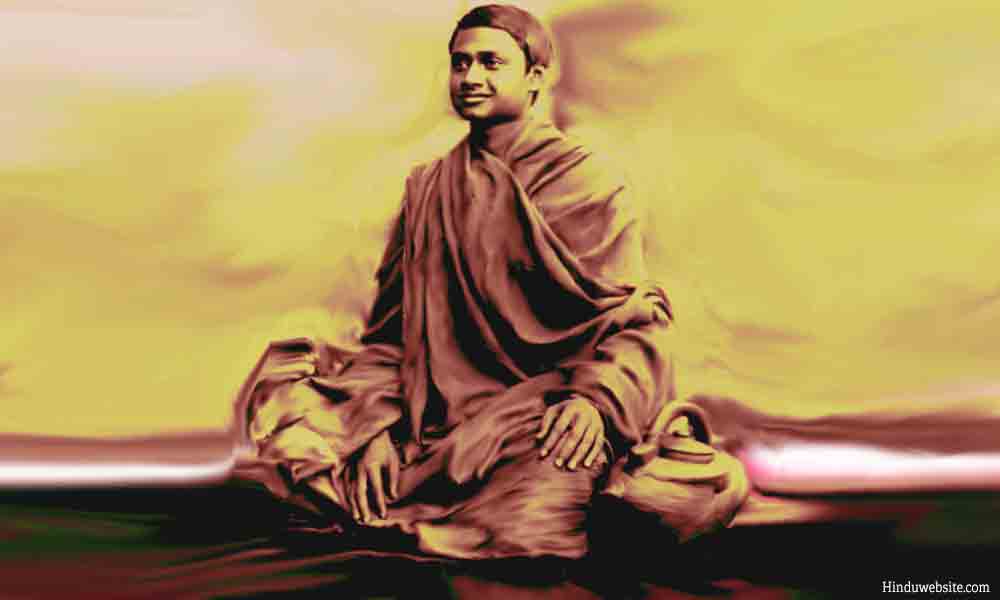 THE Upanishads represent the loftiest heights of ancient Vedic people thought and culture. They form the wisdom portion or Jnana Kanda of the Vedas, as contrasted with the Karma-Kanda or sacrificial portion. In each of the four great Vedas known as Rik, Yajur, Sama and Atharva, there is a large portion which deals predominantly with rituals and ceremonials, and which has for its aim to show a person how by the path of right action he may prepare himself for higher attainment. Following this in each Veda is another portion called the Upanishad, which deals wholly with the essentials of philosophic discrimination and ultimate spiritual vision.

For this reason, the Upanishads are known as the Vedanta, that is, the end or final goal of wisdom (Veda, wisdom; anta, end). The name Upanishad has been variously interpreted. Many claim that it is a com- pound Sanskrit word, Upa-ni-shad, signifying " sitting at the feet or in the presence of a teacher," while according to other scholars it means "to shatter" or "to destroy" the fetters of ignorance. Whatever may have been the technical reason for selecting this name, it was chosen undoubtedly to give a picture of aspiring seekers "approaching" some wise Seer in the seclusion of a Himalayan forest, in order to learn of him the profoundest truths regarding the cosmic universe and God.

Because these teachings were usually given in the stillness of some distant retreat, where the noises of the world could not disturb the tranquility of the contemplative life, they are known also as Aranyakas, Forest Books. Another reason for this name may be found in the fact that they were intended especially for the Vanaprasthas (those who, having fulfilled all their duties in the world, had retired to the forest to devote themselves to spiritual study). The form which the teaching naturally assumed was that of dialogue, a form later adopted by Plato and other Greek philosophers.

As nothing was written and all instruction was transmitted orally, the Upanishads are called Srutis, "what is heard." The term was also used in the sense of revealed, the Upanishads being regarded as direct revelations of God; while the Smritis, minor Scriptures "recorded through memory," were traditional works of purely human origin. It is a significant fact that nowhere in the Upanishads is mention made of any author or recorder. No date for the origin of the Upanishads can be fixed, because the written text does not limit their antiquity. The word Sruti makes that clear to us. The teaching probably existed ages before it was set down in any written form. The text itself bears evidence of this, because not in- frequently in a dialogue between teacher and disciple the teacher quotes from earlier Scriptures now unknown to us.

As Professor Max Mueller states in his lectures on the Vedanta Philosophy: "One feels certain that behind all these lightning-flashes of religious and philosophic thought there is a distant past, a dark background of which we shall never know the beginning." Some scholars place the Vedic period as far back as 4000 or 5000 B.C., others from 2000 to 1400 B.C. But even the most conservative admit that it antedates, by several centuries at least the Buddhist period, which begins in the sixth century B.C. The value of the Upanishads, however, does not rest upon their antiquity, but upon the vital message they contain for all times and all peoples. There is nothing peculiarly racial or local in them.

The ennobling lessons of these Scriptures are as practical for the modern world as they were for the Vedic peoples of the earliest Vedic age. Their teachings are summed up in two Maha Vakyam or "the great sayings": Tat twam asi (That thou art) and Aham Brahmasmi (I am Brahman). This oneness of Soul and God lies at the very root of all Vedic thought, and it is this dominant ideal of the unity of all life and the oneness of Truth, which makes the study of the Upanishads especially beneficial at the present moment.

One of the most eminent of European Orientalists writes: "If we fix our attention upon it (this fundamental dogma of the Vedanta system) in its philosophical simplicity as the identity of God and the Soul, the Brahman and the Atman, it will be found to possess a significance reaching far beyond the Upanishads, their time and country; nay, we claim for it an inestimable value for the whole race of mankind…Whatever new and unwonted paths the philosophy of the future may strike out, this principle will remain permanently un shaken and from it no deviation can possibly take place.

If ever a general solution is reached of the great riddle… the key can only be found where alone the secret of nature lies open to us from within, that is to say, in our innermost self. It was here that for the first time the original thinkers of the Upanishads, to their immortal honor, found it…" The first of the Upanishads to the Western world was through a translation into Persian made in the seventeenth century. More than a century later the distinguished French scholar, Anquetil Duperron, brought a copy of the manuscript from Persia to France and translated it into French and Latin, publishing only the Latin text.

Despite the distortions which must have resulted from transmission through two alien languages, the light of the thought still shone with such brightness that it drew from Schopenhauer the fervent words: "How entirely does the Oupnekhat (Upanishad) breathe throughout the holy spirit of the Vedas! How is every one, who by a diligent study of its Persian Latin has become familiar with that incomparable book, stirred by that spirit to the very depth of his Soul! From every sentence, deep, original and sublime thoughts arise, and the whole is pervaded by a high and holy and earnest spirit. "Again, he says: "The access to (the Vedas) by means of the Upanishads is in my eyes the greatest privilege which this still young century (1818) may claim before all previous centuries."

This testimony is borne out by the thoughtful American scholar, Thoreau, who writes: "What extracts from the Vedas I have read fall on me like the light of a higher and purer luminary which describes a loftier course through a purer stratum free from particulars, simple, universal." The first English translation was made by a learned Hindu, Raja Ram Mohan Roy (1775-1833). Since that time there have been various European translations French, German, Italian and English. But a mere translation, however accurate and sympathetic, is not sufficient to make the Upanishads accessible to the Occidental mind. Professor Max Mueller after a life- time of arduous labor in this field frankly confesses: "Modern words are round, ancient words are square, and we may as well hope to solve the quadrature of the circle, as to express adequately the ancient thought of the Vedas in modern English."

Without a commentary, it is practically impossible to understand either the spirit or the meaning of the Upanishads. They were never designed as popular Scriptures. They grew up essentially as text books of God-knowledge and Self-knowledge, and like all text books they need interpretation. Being transmitted orally from teacher to disciple, the style was necessarily extremely condensed and in the form of aphorisms. The language also was often metaphorical and obscure. Yet if one has the perseverance to penetrate beneath these mere surface difficulties, one is repaid a hundredfold; for these ancient Sacred Books contain the most precious gems of spiritual thought.

Every Upanishad begins with a Peace Chant (Shantipatha] to create the proper atmosphere of purity and serenity. To study about God the whole nature must be prepared, so unitedly and with loving hearts teacher and disciples prayed to the Supreme Being for His grace and protection. It is not possible to comprehend the subtle problems of life unless the thought is tranquil and the energy concentrated. Until our mind is withdrawn from the varied distractions and agitations of worldly affairs, we cannot enter into the spirit of higher religious study.

Summary:From the Upanishads, Translated and Commentated by Swami Paramananda, the Vedanta Center, USA, 1919. The text is updated to meet the current usage of words by Jayaram V