A Story From the Upanishads About Self 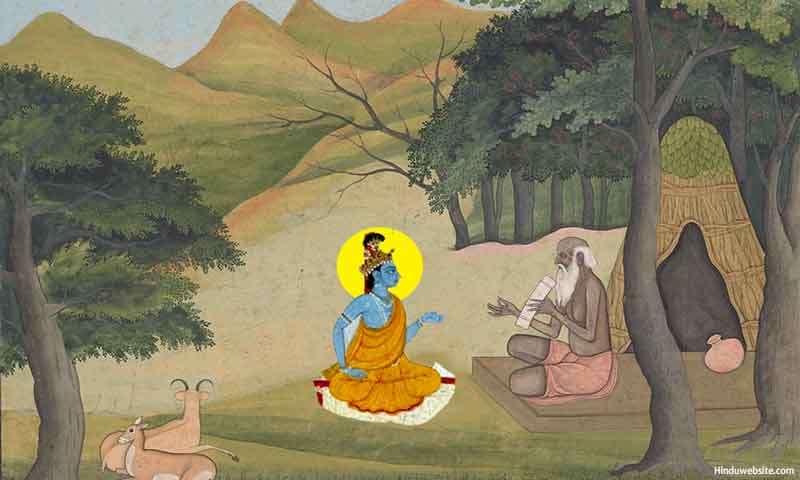 Ten students used to study together under a teacher. One day, they all went to attend a function in a neighboring village. While going, they came across a river which they crossed safely. However, on their return journey when they were crossing the same river, there was a flash flood and they found themselves inundated by torrents of water. With great difficulty they managed to reach the shore.

After relaxing for some time on the river bank, the leader of the group wanted to make sure that all the ten students were safe in the group, and no one was drowned or lost. Therefore, he made a quick count of them, but to his great dismay found that only nine were present and one was missing. That made him very anxious.

He wanted to make sure that he made no mistake. Therefore, he asked them to lineup before him and counted them again by touching each of them. Still, his count came to nine only. That alarmed him and others. One of the students offered to recheck the count. He exchanged the place with the leader and counted just as the leader did. He too found that only nine students were present and the tenth one was missing.

At last, the count was confirmed. A tragedy had struck them. The tenth student was mysteriously missing. They did not know what happened, but somehow their number did not tally and one of them was absent. Therefore, grief stricken, they sat on the river bank and began crying and wailing, as if they lost their kin in an accident.

At that time, a wise man (jnani) was passing that way. He was a Sramana, a wandering mendicant, who had spent considerable time in contemplation and austerities. Seeing them, he took pity on them and asked them what the problem was. Sobbing uncontrollably, the students narrated him the whole story and explained how they lost one of the students. Hearing them, the wise man understood the problem!

Having realized what had happened, he assured them that there was no cause for worry. "No one is missing. It is just your delusion or ignorance," he told them. Encouraged by his words, the students took refuge in him and approached him with a request to enlighten them.

The student instantly realized that he excluded himself from the count and he was indeed the missing tenth person. He was filled with joy as he realized that they were all safe and no one was missing. The students felt happy and relieved. They rejoiced in the knowledge that they crossed the river without anyone missing. With great relief and joy in their hearts, they profusely thanked the teacher for opening their eyes and correcting their mistake.

This is a story from one of the Upanishads. Through such simple stories, the Upanishads explain great philosophical truths. In Creation, everything is objectified, starting from the body of a person to the universe itself. Within the microcosm of the body the organs such as the senses, the mind, the ego, intelligence, breath, speech, heart, the gross and subtle bodies are also objectified. While counting the organs or parts of the body, we do not count the soul.

In the same way, we explore the planets, the stars and galaxies, but do not pay much attention to that which supports them all. All that we experience through our senses, both subtle and gross entities of existence are effects or objects. What brings them into existence and supports them, or what objectifies them and envelops them as their very source, is the Self which we do not count as a reality until our eyes are fully open and our intelligence is free from the impurities.

The gross, subtle and causal entities are objectified very clearly in the waking state, vague in the dream state and completely resolved in the deep sleep state. So, there are three distinct entities each of them objectified in three states of experiences. What is objectified must be different from the subject. Like in the Upanishad story, the Self is apparently missing but all the above mentioned nine entities are counted by the Self only.

The Self (Atman) is the subject, which is distinct from the nine entities (mentioned in some Upanishads as the nine breaths) that constitutes the human personality such as the organs, the senses, the mind, the ego, etc. They are all perceptible to the senses. However, what is imperceptible and seldom realized is the one which keeps the count and which upholds them all as their source and support

Thus, the story establishes the existence of the Self and our ignorance of it. Only the seer who has seen the Self in a state of self-absorption can vouch for its existence. Only he can confirm that the person is intact and nothing is amiss from him. One become lost in the flood of life, but by taking refuge in the Self one can safely cross the river of Samsara.

Symbolism has its own limitations. The analogy in this Upanishad story should not be stretched too far, but should be used only to the point of establishing the existence of the Self. Every example from the scriptures should be taken only up to the limit for which it is meant. The Self cannot be grouped with the gross, subtle and causal entities of the waking, dream and deep sleep states of a person. It is beyond them and entirely different from them. It symbolized here as one of the ten students for our understanding only.

The knowledge of the Self is the ultimate knowledge. It is true knowledge which dispels our ignorance and delusion. By knowing the Self, we overcome our fears and anxieties and become assured in the knowledge that the Self is indestructible and never amiss. It is also important how knowledge is gained. It must be gained through discernment and unclouded judgment, which is possible only when the mind is pure, and the knowledge is grasped clearly, without errors. Knowledge with absolute clarity but error-prone is dangerous, whereas knowledge which is free from errors but lacks clarity is useless, since it will be lost at any time. It is why Self-knowledge requires considerable effort for self-purification and inner transformation.

Author Info: This story was originally submitted by N. Amarnath. It was rewritten for clarity and improved with additional information by Jayaram V for Hinduwebsite.com.