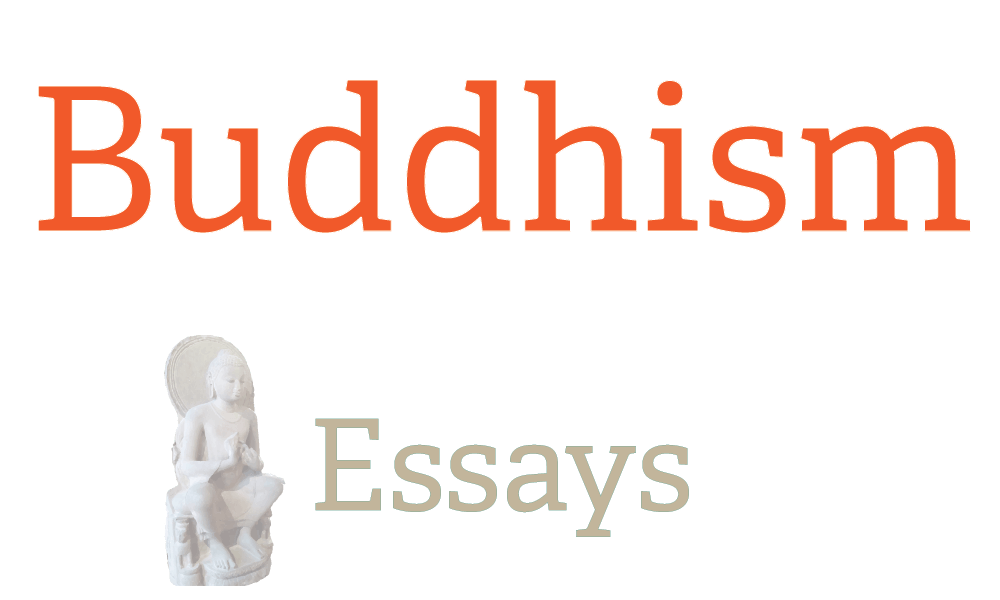 Essays on the Beliefs and Practices of Buddhism

Buddhism is a fascinating religion. Buddhist philosophy is very a down to earth philosophy. The Buddha did not believe in transcendental states, or in the eternal nature of anything in existence. According to Buddhism impermanence is the very nature of existence, and no one (including gods and heaven) is free from it. The Buddha limited his observation and teachings to the perceptual reality or the not-self and suggested various methods and approaches to remove its influence upon the mind and body so that one can experience peace and happiness. His approach was one of observation with mindfulness to cultivate discernment or intelligence, and use that to practice right living on the Eightfold Path. The Buddha did not believe in God or soul. He believed in the experiential and cognitive reality as the starting point to know oneself and find an escape from suffering, by removing the hindrances that effect our thinking and perception. The following essays reflect the breadth and scope of Buddhism and its intellectual appeal and ageless wisdom to people of all cultures and backgrounds. His teachings and philosophy are very relevant in today’s context where people have to cope with an overwhelming pressure from the demands of our civilized world.

Consciousness of Self and Not-self in Buddhism and Hinduism

Vajrayana, The Journey of Emptiness

Jhana As An Emptying Process

Adibuddha in the Kalachakra Tantra of Vajrayana Buddhism

Contemplation Upon Dukkha or Suffering

The First Noble Truth of Dukkha in Buddhism

Is Buddhism a Copy of Hinduism?

Buddhism Vs. Hinduism Compared and Contrasted

The Not Self Advantage in Buddhist Practice

Jhana, The Rapturous State of Stillness in Buddhist Meditation Practice

Is Buddhism a Spiritual Religion?

Karma Doctrine in Hinduism and Buddhism

Understanding Karma From A Buddhist Perspective

Awakening and Enlightenment in Buddhism on the Path to Nirvana

The Buddha on Jhanas

Anatta and Rebirth in Buddhism

Eight Realizations of the Great Beings

Buddhism in a nutshell

Is Buddhism a religion or philosophy

Buddhism and Social Action An Exploration by Ken Jones

Buddhism- A Method of Mind Training

Buddhism and belief in God or concept of God

The Buddha's discourses on Kamma

The Buddhist universe - thirty one planes of existence -

Introduction to the Dhammapada Bhikkhu Bodhi

A Comprehensive Manual of Abhidhamma Introduction only

The Agendas of Mindfulness

The burden of the aggregates

The Essentials of Buddha Dhamma in Meditative Practice

A Sketch of the Buddha's Life - Readings from Pali Canon

Excerpts on the Dhamma from King Asoka's edicts

The meaning of Buddha awakening

Death and Dying in Buddhism

Discourses of the Ancient Nuns, Bhikkhuni-samyutta

The Path of Concentration and Mindfulness

Crossing the Ocean of Life

Ignorance or avijja is defined

The Demons of Defilement - Nature of ignorance

Detachment and Compassion in Early Buddhism

Devotion in Buddhism by Nyanaponika Thera

Buddhist monastic code on the rules of disrobing a monk

Emptiness, a Buddhist point of view

The Five Aggregates A Study Guide

Four traditions of the Buddhist monks

Healing power of the percepts

Ignorance from the aspect of Right View

Kamma and its fruit

Study guide on Kamma or karma

Meditating on No-Self A Dhamma Talk Edited for Bodhi Leaves

Metta The Philosophy and Practice of Universal Love

Nibbana, the ultimate goal of the Buddha Dhamma

Nibbana as Living Experience- two Studies from the Pali Canon

The Formula of the Four Noble Truths

The Not-self Strategy by Thanissaro Bhikkhu

The Position of Women in Buddhism

Respect in Buddhist Thought and Practice

The Practice of Loving-Kindness (Metta)

Recognizing the Dhamma A Study Guide

The Road to Nirvana Is Paved with Skillful Intentions

The round of rebirth - samsara

The Buddhist Teachings on Samvega and Pasada

A Simple Guide to Life by Robert Bogoda

The Buddhist concept of craving or tanha

The third Noble Truth - the Cessation of suffering

Thirty one planes of existence - the Buddha worlds

Three Cardinal Discourses of the Buddha Translated by Ñanamoli Thera

Buddhism and the concept of renunciation

Vedanta and Buddhism A Comparative Study

A Verb for Nirvana

Why End Suffering by Nyanaponika Thera

Glimpses of the Thudong Bhikkhu Life

The Bhikkhus' Rules A Guide for Laypeople

Bodhinyana A Collection of Dhamma Talks

Dana, the practice of giving

Using Meditation to Deal with Pain, Illness and Death

Dhamma vinaya - Lists of summaries of training rules for the monks

Duties of the Sangha

The economy of gifts - code for the Buddhist monks

A fistful of sand, talks and discussions about dhamma practice

Food for the Heart, Talks on the Dhamma practice

Going against the flow, using mindfulness to achieve neutrality

The Power of Mindfulness

Things as They Are, A Collection of Talks on the Training of the Mind

The search for security