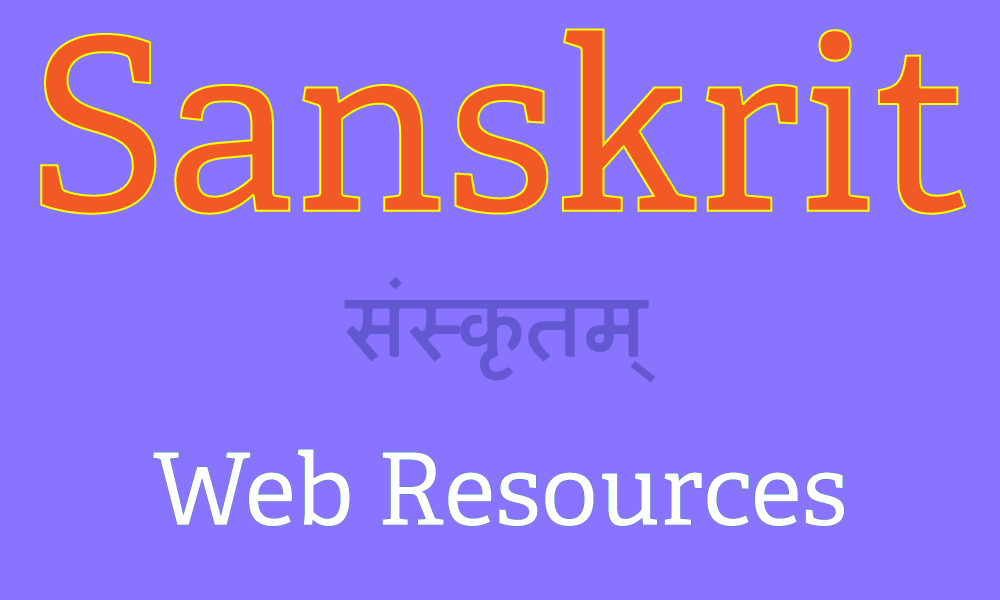 Links: The Origin of The Sanskrit Language

Sanskrit is one of the oldest languages of the Indian subcontinent. It belongs to the Indo-European group of languages along with Latin, Greek, German, Russian, English, etc. It is also the source for many languages which originated in India and which do not form part of the Dravidian group of languages. Sanskrit played a significant role in the development of Indian civilization and the growth of Hinduism, Buddhism and Jainism. Many religious texts of these religions were composed in Sanskrit. Even the texts of Zoroastrianism were also composed in an ancient version of Sanskrit only. The following are a few important resources on the origin and development of Sanskrit and its linguistic background.

The following is an essay suggesting some sort of Hindu linguistic influence upon English, Germanic, and Scandinavian lands, circa 1200 to 1600. Is it possible that some group speaking some Sanskrit-related language(s) was present in Northern Europe prior to the British occupation? I managed to get a qualified language expert to admit, albeit begrudgingly, to this possibility, however implausible the strange theory seemed to him.

Relationship Between Sanskrit and English

The purpose of this essay is to demonstrate the relationship between Sanskrit and English. To simplify matters, I will be using root-words and words in their purer forms. There will be no need to demonstrate every inflected form of a word. Words placed in parentheses are those English words derived from Sanskrit. Sometimes, there will be mention of words from other intermediary languages, serving as a demonstration of changes in spelling and pronunciation.

An Essay by Richard Stoney of Humboldt County, California, USA. In 1728, there appeared the first public production of John Gay's Beggar's Opera, which dealt with activities of some British crooks. As known by anyone familiar with the play, the names are highly contrived (Filch, Crook-Finger'd Jack); in fact, at least one source says that the start of criminal cant coincides with the arrival of Gypsies, who originally came from India. This essay will show that John Gay used Sanskrit to create the names. What many people do not know is that European missionaries were very knowledgeable in Sanskrit circa 1600.....

Find here additional resources on on the origin, history, and linguistic development of Sanskrit and its relation to other Indo-European languages.

The Sanskrit Dictionary contains translation of most well known sanskrit words and phrases. Useful for those who want to study the original sanskrit texts or understand their meaning.

The Journal of INDO-EUROPEAN STUDIES (pdf)

Volume 35, Numbers 1 & 2 Spring/Summer 2007. Contains several interesting essays on Indo-European Studies. The Etymology of English ale. Grendel’s Mother (Beowulf) and the Celtic Sovereignty Goddess. A Spatial Analysis of Neolithic Cultures throughout Eastern, Central, and Northern Europe in Relation to Proto-Germanic. On the development of the tree-diagram models of the Indo-European languages.Vowel Epenthesis vs. Schwa Lexicalization in Classical Armenian. A Panorama of Indo-European Linguistics since the Middle of the Twentieth Century: Advances and Immobilism.

In 1786 Sir William Jones, the English Chief Justice in India, noticed similarities between Greek and the ancient language of India, Sanskrit. This observation led Jones to hypothesize that Greek and Sanskrit, as well as Latin, descended from a common linguistic ancestor, now lost, and further that this language was also the source of the Germanic and Celtic languages.

This is a hypertext Sanskrit-English / English-Sanskrit Dictionary for Spoken Sanskrit, which s designed to contain the much used common words that are necessary for daily communication, in addition to words from the classical texts. spokensanskrit.de, now spokensanskrit.org, was founded in 2005 as a nonprofit enterprise in Cochin, India, by Sri Chidambaram Narayanaswami († 2016) and Klaus Glashoff with the support of many voluntary contributors. We find this dictionary is very handy if you want to check instantly the meaning of most common Sanskrit words or find Sanskrit equivalents to English words.

A possible Homeland of the Indo-European Languages

Most educated people have at least a rough idea, what 'Indo-European' (IE) languages are: The many languages spoken between the Northwest of Europe to the East of the Indian subcontinent (historically even to Xinjiang in the Northwest of China), which are combined by their common inherited amount of lexemes (e.g. the system of counting or pronouns) as well as the grammar. For basic informations, see any newer encyclopedia, the pertinent Wikipedia sites are substandard. Highly unreliable are pages of non-Indo-Europeanists, often unable to assess the special problems of historical linguistics, lexicostatistics, and prehistory, as addressed in Holm 2007b. Such authors are often recognizable by citations of a few secondary sources or even racial nonsense.

The first systematic theory of the relationships between human languages began when Sir William Jones, "Oriental Jones," proposed in 1786 that Greek and Latin, the classical languages of Europe, and Sanskrit [Sãskr.ta, ], the classical language of India, had all descended from a common source. The similarities between the languages had already been noted in 1768 by Gaston Cœurdoux, who informed the French Academy. The evidence for this came from (1) the structure of the languages -- Sanskrit grammar has detailed similarities to Greek (and, as would later be seen, Avestan), many similarities to Latin, and none to the Middle Eastern languages, like Hebrew, Arabic, or Turkish, interposed between Europe and India [note] -- and (2) the vocabulary of the languages.

The bulk of the numbers here reflect my own research which has been ongoing over the past 20 years. Most of the forms on these pages represent what are referred to by linguists as "traditional dialect" forms and are no longer in common use, given our "global village" tendencies . For example, many Scots speakers nowadays will probably not use the forms "twa" or "twae" for "two"; such is the levelling effect of English. There are however many Scots speakers who will use these forms. It is these forms that I am interested in rather than whether the average Scots says [ty:] or [tø:], using an English number with a Scots accent.

The Dravidian languages are a language family spoken mainly in southern India and parts of eastern and central India, as well as in northeastern Sri Lanka, Pakistan, Southern Afghanistan, Nepal, Bangladesh and Bhutan,[2] and overseas in other countries such as Malaysia and Singapore. The Dravidian languages with the most speakers are Telugu, Tamil, Kannada and Malayalam. There are also small groups of Dravidian-speaking scheduled tribes, who live beyond the mainstream communities, such as the Kurukh and Gond tribes

Kindly pronounce-'pitra'…yes…yes, come on, voice out-'pitra'! Alright, now speak-'pater'? Then, utter-'father'. And for once, pronounce-'pedaer'. Now, repeat all these words in one breath- Pitra! Pater! Father! Pedaer! Hopefully, till now, you might have sensed a unique inherent sound resonating in all the above words. However, The word 'pitra' is of Sanskrit language. Pater, father, and pedaer belong respectively to Latin, English, and Persian languages. The most astonishing and remarkable fact is that all these multilingual words have the same meaning-'FATHER'!

Automated language processing is central to the drive to enable facilitated referencing of increasingly available Sanskrit E-texts. The first step towards processing Sanskrit text involves the handling of Sanskrit compound words that are an integral part of Sanskrit texts. This firstly necessitates the processing of euphonic conjunctions or sandhi-s, which are points in words or between words, at which adjacent letters coalesce and transform.

10 Most Interesting Facts About Sanskrit – The Language of the Gods

Sanskrit is one of the oldest language known to us. It is also believed to be the most systematic and technical language of all. It is also referred to as the mother of all languages and is the only language that is used in holy functions and ceremonies of the Hindus, as it has always been regarded as the sacred language of the religion."

Linguistics was born from the study of the superfamily of Indo-European languages (about half of the world's population has an Indo-European language as mother tongue). During the last two centuries, the linguists have rebuilt the vocabulary and syntax of the Indo-European protolanguage. Early investigations located its origin in Europe. Those investigations indicated migratory routes by which the daughter tongues would have developed till they grouped in two well defined branches: Eastern and Western.

Sanskrit is regarded as the ancient language in Hinduism, where it was used as a means of communication and dialogue by the Hindu Celestial Gods, and then by the Indo-Aryans. Sanskrit is also widely used in Jainism, Buddhism, and Sikhism. The term ‘Sanskrit’ is derived from the conjoining of the prefix ‘Sam’ meaning ‘samyak’ which indicates ‘entirely’, and ‘krit’ that indicates ‘done’. Thus, the name indicates perfectly or entirely done in terms of communication, reading, hearing, and the use of vocabulary to transcend and express an emotion.

Sanskrit is the ancient Indian language in which much of India's traditional literature is written. Knowledge of Sanskrit is essential for anyone who wishes to understand these traditional texts. The grammar of Sanskrit is extremely systematic, but also fairly complex. Structured, guided study is essential for success in learning Sanskrit. This website is intended to compliment use of the textbook "The Sanskrit Language", by Walter Harding Maurer. Students desiring consistent, long-term study of Sanskrit may find this site a beneficial guide to the textbook. This site contains: Answers to exercises, Helpful hints and corrections to exercises, Summaries of grammatical topics, and Quick tests of grammatical topics

What Languages Are Derived From Sanskrit?

As one of the first languages known to humankind, Sanskrit can be traced back thousands of years, and its influence is seen in languages used around the globe. It is the traditional Indian language (India has 22 official ones!), and is used in Jainism, Buddhism, and Hinduism ceremonies. This ancient speak is part of the Indic sub-branch of language, and its oldest form is called Vedic Sanskrit, used around 1500 BCE. Sanskrit is considered a “high language,” and is used mainly for scientific and religious purposes. It was used in most ancient literature, especially important pieces about mathematics, medicine, astrology, and astronomy. It is still being taught and in many places throughout the world.