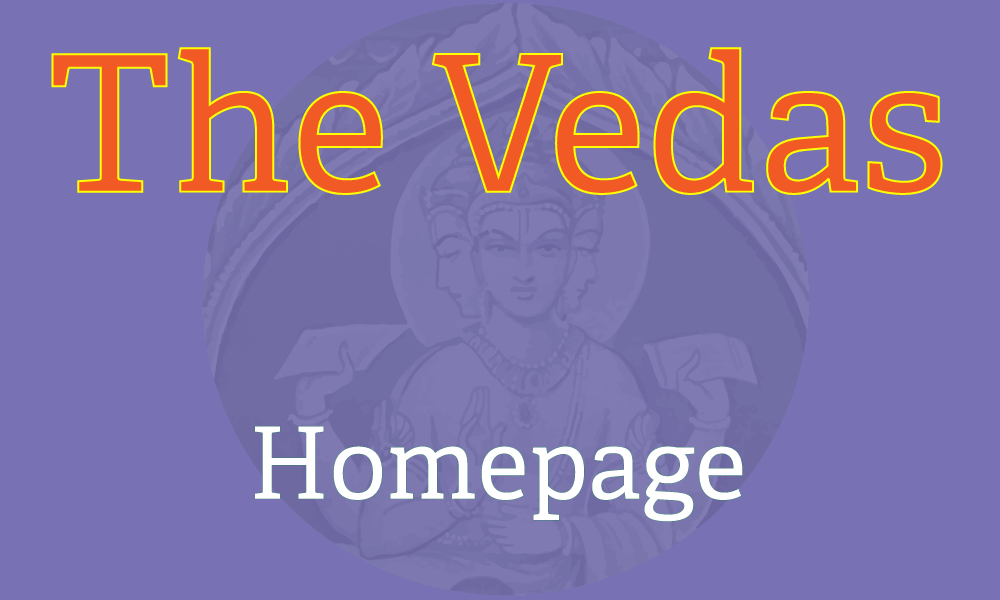 The Veda are the most sacred scriptures of Hinduism. They constitute its most foundational work, which every Hindu tradition and sect claims as its source. They also embody the most ancient ritual and spiritual traditions of the world. Hidden within them are a number of secrets which are yet to be fully deciphered and understood. The Vedas are not manmade. They are revelatory scriptures, which exist eternally in the highest world of Brahman. They are considered an aspect of Brahman only. The Vedas are exhaustive scriptures that have not been modified or edited since they were revealed and chanted thousands of years ago. Their sanctity and purity have been ensured by many a lineage of Brahmana families and teacher traditions. According to Hindu beliefs, the Vedas suggest a ritual model used by God to create the worlds and beings. Since the Vedas are necessary to continue and preserve the order and regularity of the worlds, in the beginning of creation, He reveals them to gods and humans for the welfare of the worlds. At the end of creation, He withdraws them again. Some people say that all human knowledge, known and yet to be known, is hidden in the Vedas in symbolic form, including all scientific discoveries and inventions. It is true that the Vedas are not mere books of magical chants. They are loaded with spiritual knowledge, which reveals itself to the degree we are spiritually advanced. Since the Vedas carry a great significance in our study and understanding of Hinduism, we have assembled in this section comprehensive information about the Vedas, Vedic beliefs, practices, gods and goddesses, history and philosophy. To understand the significance of the Vedas you may go through the translations of the four Vedas, or read the hundreds of articles on the subject which are available through the links in this section.

The Rigveda is the oldest and most important of the Vedas and richly contributed to other Vedas. Its hymns are called Riks. The Rigveda is also an important source of Vedic history and contains many important hymns, such as the Purusha Sukta, and Creation Hymns. This is a complete English translation of the Rigveda.

The Samaveda is the second most important Veda in the Vedic triad and carries a great significance in ritual singing because of their musical and lyrical quality. Its hymns are known as Samans, sung by the Udgatris in specific meters. This is a complete translation of the Samaveda

The Yajurveda is called the book of forumulas. We have two separate English translations of the Yajurveda. Both are useful for academic study. One is the translation of the White (Sukla) Yajurveda presented in two parts covering 40 books, and the other the Black (Krishna) Yajurveda covering seven khandas.

The Atharvaveda is the most recent of the Veda qauartet. For a long time it was not even considered a Veda. It contains moslty magical rituals to cast charms, spells, seek protection against death and disease, attract lovers, or to cause or prevent harm. This is a complete English translation of the Atharvaveda.

The Vedas are difficult to understand since they contain a lot of symbolism and archaic expressions. These essays may help you increase your knowledge of the Vedas, Vedic philosophy, beliefs and practices, Vedic rituals and sacrifices, mantras, Vedic gods and goddesses, symbolism,and related subjects .

The Upanishads are the end part of the Vedas. They contain gems of spiritual wisdom and constitue the heart of Hindu philosophical enquiry and exploration of existential truths. You will find here original translations of all the major and minor Upanishads and essays.

If Atman is the lord of the body, Brahman is the Lord of the universe. He is the eternal, indestructible, all pervading, Supreme Self, and synonymous with the Vedas themselves. The Vedans contain the hidden power of Brahman in sound form as the indestructible knowledge (akshara). We have included here the most comprehensive information on Brahman.

Atman means the breathing one, the individual soul. According to Vedic beliefs it is without form and without attributes, and usually referred as the Self. Atman is the deity in your body extolled in classical yoga as Isvara, the Lord. We have included here a list of informative and transformative essays on the meaning and significance of Atman in human life.

Vedanta means the end of the Vedas, which is a reference to the Upanishads and the knowledge they contain. Vedanta deals with such existential truths as the source of existence, the nature and process of creation, the nature of reality, mortality, delusion, bondage, and liberation of souls from Samsara. We have included here essays on Vedanta and different schools of interpretation.

Bhagavadgita means song of God or song for the servants of God. It is the simplified, condensed and summarized version of the Vedas themselves presented in a conversational or dialogue form for easy understanding and practice. This secion leads to a comprehensive selection of translations and writings on the principles, practice, and essential philosophy of the Bhagavadgita.

Not many people know that in the Vedic cosmology all beings have limitations so that no class of beings become supremely powerful and upset the balance of creation. Gods depends upon humans for food and humans depend upon gods for their peace and prosperity. From this essay, you will know the full breadth and depth of Vedic pantheon and the significance of various Vedic deities. Untitled 3.

The Vedic people kept their knowledge secret and maintained no historical records. The tradition continued in India for over 4000 years. As a result, it is difficult to construct Indian history and understand the historical processes that shaped Hinduism and how and why Vedic religion lost its significance. These essays provide a limited, but clear perspective on the histoyr of Hinduism.

Most popular Hindu rituals are known as Yajnas, Homas, Vratas, Puja, Nitya Karmas, Archanas, and Arathi. Hindu ritual model is also the basis for many beliefs and concepts of Hinduism such as creation, karma yoga, procreation, rebirth, birth and death, etc. The following is a list of important essays available at Hinduwebsite.com about the ritual tradition of Hinduism.

The Vedanta school which is as ancient as the Upanishads, speaks about the nature of existence, and the truths concerning Brahman, Atman and their relationship and roles in the manifested worlds. There are many sub schools of Vedanta, of which three are most well known, the school of non-dualism (advaita), dualism (dvaita), and qualified dualism (vishstadvaita). The essays cover some of these aspects in considerable detail.

One of the distinguishing features of Vedic civilization was the smriti literature, especially the body of knowledge contained in the law books or books of duties, known as Dharmashastras. You will find here translations of many law books and a comparative analysis of the knowledge in them. .

TWe have included here a selected list of books for purchase on the Vedas, Vedic philosophy, Vedic mathematics, Vedic Astrology, Rituals, Mantras, literature, the teachings of the Vedas, Ayurveda, derivative knowledge, and ancillary subjects. You may also check this link to our own books on Hinduism.