The 24 Tattvas of Creation in Samkhya Darshana 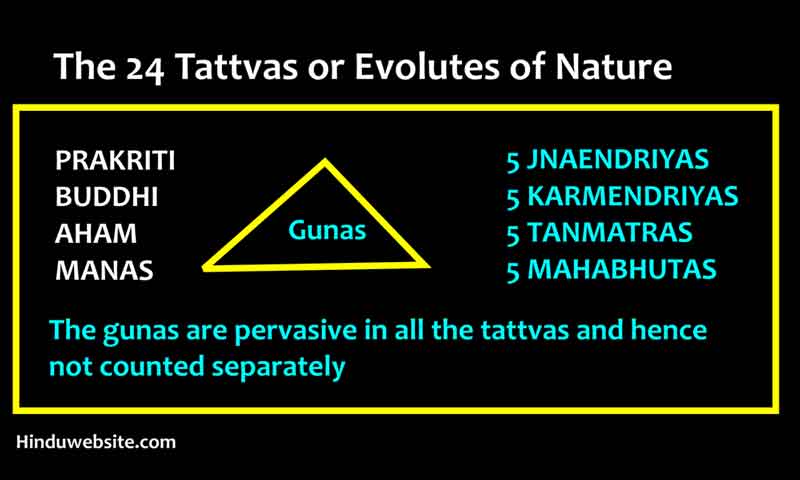 Summary: This essay explains the significance of tattvas or finite realities of Nature (Prakriti) according to the Samkhya school of Hinduism.

Hinduism owes a great deal to the Samkhya (Sankhya) philosophy or the Samkhya Darshana. Samkhya means number. Samkhya philosophy deals with the number of realities that are present in existence. According to Richard Garbe, it is "the most significant system of philosophy that India has produced." It exerted profound influence on many scholars in ancient India, China and, according to some, even in Greece. Even today, it attracts the attention of many scholars, although it is not a living philosophy and has no active followers.

We find references to the school in scriptures such as the Bhagavadgita, the Mahabharata, and Upanishads such as the Svetasvatara and the Maitrayani Upanishada. Although originally it might have begun as a theistic philosophy with its roots in the Upanishads, it appears that subsequently it morphed into an atheistic school which assigned no role to God in creation and attributed all causes and effects to Nature. Its main tenets and ideas gradually found their way into main stream Hinduism and several sects of Buddhism.

According to Samkhya philosophy, Prakriti or Nature is responsible for all manifestation and diversity, while the individual souls, which are eternal, remain passive. When they come into contact with Nature, they become subject to its influence and become embodied by its realities. Prakriti is an eternal reality and the first cause of the universe. In its pure original form, it is the unmanifest (avyaktam), primal resource, the sum of the universal energy. It is without cause, but acts as the cause and source of all effects, and "the ultimate basis of the empirical universe.”

The tattvas or realities

Prakriti manifests things by modifying or transforming the causes into effects, which are already hidden in them. Thus, the school believes in the theory of evolution or transformation (parinama vada). Using the triple gunas and its various realities (tattvas) it creates numerous beings and objects. However, Prakriti has no power or control over the souls (Purushas), which are eternal, numerous, independent and immutable. It cannot also create life forms without the participation of the souls. Creation (Shristi) begins, when the equilibrium of the gunas (modes) in Prakriti become disturbed and its realities manifest. According to the school, in all 24 realities (tattvas) emerge or evolve out of Nature, each having the predominance of one or more gunas. The 24 tattvas are listed below.

They are the evolutes of Nature. The Mahat (the Great One) is the first reality to emerge from Prakriti, when sattva is predominant. It has a universal aspect as the source of the world, and a physical aspect as intelligence or buddhi in the living beings. It is responsible for rationality and discriminating awareness. From Buddhi, ahmkara or the feeling of individuality evolves when rajas predominates. It is responsible for the self-sense (ego). Up to now the tattvas are subtle, but from here on gross. From ego evolve the brain (manas), the five senses (jnanedriyas), the five organs of action (karmendriyas), the five subtle essences (tanmatras) or objects of the senses, and the five gross elements (mahabhutas).

They constitute the 24 tattvas. Together with Purusha (individual soul) who is an eternal reality, the number becomes 25. Nature makes use of them all to produce the diversity in the world. Of them Prakriti is without a cause. Mahat, ahamkara, and the five tanmatras are both causes and effects. The rest are effects only. Purusha is neither a cause nor an effect. It is eternal, without a cause, and immutable.

The Natural evolution of things and beings as suggested in the Samkhya has many parallels in the modern theories of evolution. However, while the modern theories focus mainly upon the evolution of physical bodies, the Samkhya also proposes the evolution of beings over many lifetimes. Further, it views evolution or transformation of causes into effects not as miracle work of God, but as a transformative process which progresses through different phases and in predictable patterns until the souls escape from the mortal world.

The Samkhya school was founded by Kapila, who probably lived in the Vedic period, before the composition of principal Upanishads such as the Svetasvatara, Katha, Prashna and Maitrayani Upanishads. Kapila Sutras, or Samkhya Sutras is the earliest known text of the school, which is ascribed to Kapila.  However, we do not seem to have the original world. Our current knowledge of the schools is derived mainly from the Samkhya Karika of Isvara Krishna  who lived in either third or fifth Century AD. Many commentaries on the Karika were written. Of them the commentaries of Gaudapada and Vijnana Bhikshu are well known.

In the second chapter, the Bhagavadgita presents its own theistic version of Samkhya. It has a few common features with the original school, but is essentially theistic. While Samkhya recognizes Nature as the source of all creation, the Bhagavadgita identifies Brahman as the first cause of creation and Nature as a dependent reality, which manifests the worlds and beings under the will of God.

The Samkhya school has a close affinity with the Yoga school of philosophy. The classical yoga is modelled on the knowledge of the Samkhya only. The Yoga Sutras contains many references to Isvara, the individual soul, but makes not assertions about a supreme, universal God. The idea of Prakriti as the sole source creation and evolution probably contributed to the popularity of Tantras and the tradition of Shakti worship.

Impact on Hinduism, Buddhism and Jainism

The Samkhya philosophy left a lasting influence upon Hinduism, Buddhism and Jainism. While we do not know how far its doctrines found their way into them, it is possible that they might have found in it support for their own beliefs and practices. For example, Buddhism, Jainism and several schools of Hinduism, do not recognize creator God. They also acknowledge the role of Nature in the manifestation of things.

In some respects, the Yogasutras of Patanjali is both an extension and an exposition of the Samkhya school. The Samkhya yoga of the Bhagavadgita is but a subtle refutation of the basic premise of the Samkhya philosophy with regard to Brahman or the supreme Purusha as the primary and efficient cause of the creation. However, interestingly, it accepts many concepts of the school such as the division of the gunas, the bondage of the souls, relationship between Nature and individual souls, the liberation of the souls through yoga and self-transformation.

As in the Vedanta, the Samkhya school suggest that souls become bound when they come under the influence of Prakrity and become enveloped by delusion and ignorance. When they realize that Nature is responsible for their bondage and has nothing to do with them, they strive for liberation and achieve release or freedom from the cycle of births and deaths.