What is Sanatana Dharma? 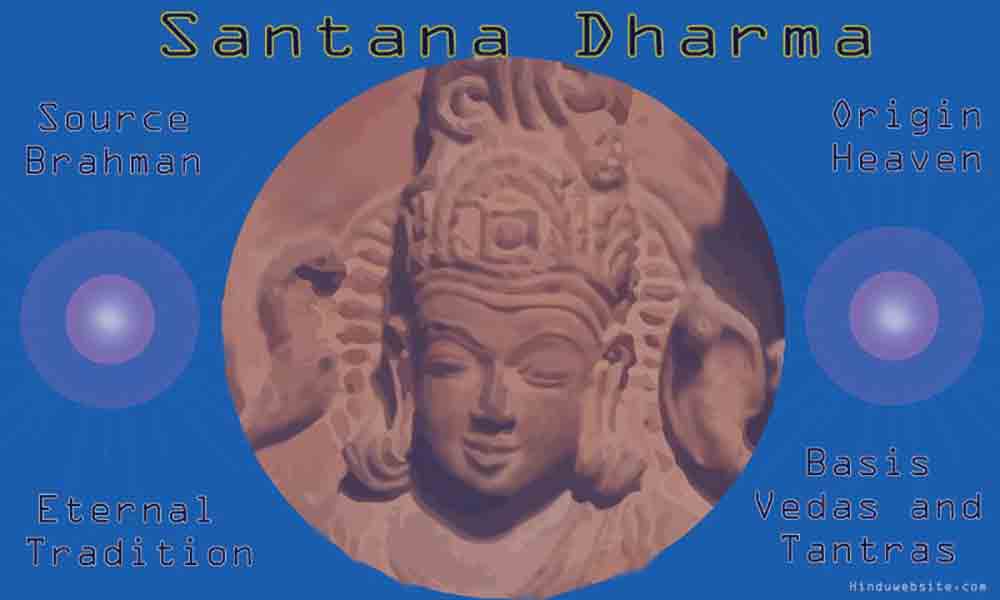 The practitioners of the ancient faith whose origins can be traced to the Vedas believed that their religion was eternal, with its roots in heaven, and originated directly from God in the very beginning of creation.

Therefore they preferred to call it the eternal religion (sanatana dharma), a name, which many Hindus still prefer to use instead of Hinduism because the name Hinduism reminds many of the abuses their ancestors and their religion suffered in the hands of the past invaders like the Delhi Sultans, the Moguls and the British.

Besides, as we have seen, the word Hindu was used originally in a secular sense rather than religious. Sanatana means eternal and dharma means duty or obligatory duty. The expression has twin meanings.

According to our tradition, duty is not only for humans, but also for everyone, including gods, celestial beings, demons and even God Himself. The duty of each is eternal, in the sense that creation after creation, beings have to perform their duties to keep the world and the world order going. So is the case with God. His duty never ends. He has to wake up at the beginning of each creation and do His duty before He dissolves the worlds and goes to sleep for billions of years.

So is the case with us. We have to wake up every day and do our respective daily duties, before we go to sleep. When we die, we return again to complete our unfinished tasks. Our duties are thus eternal and obligatory. If we do not perform them, the worlds will fall into disorder.

Since our religion speaks about them and insists that we perform them without fail, it is aptly called eternal religion or a religion that speaks about eternal duties. Secondly, the basis of the religion is the Vedas, which are believed to be eternal.

Hence, our religion, which is derived from them, is also known as eternal religion. Creation after creation and in the beginning of each manvantara, God reintroduces the Vedas to the human beings for their welfare so that they know what their duties are and how they should perform them.

Hinduism is thus a religion of continuity, a religion that appears in each creation and does its duty as the Voice of God to impart knowledge and liberate people.