Symbolic Significance of Ganga As a Purifier 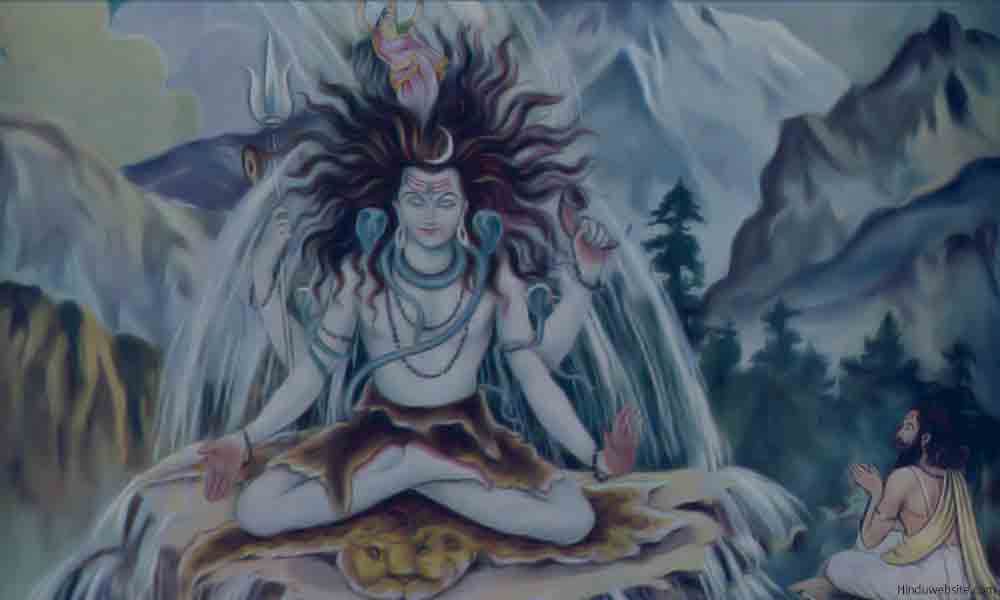 Note: This is next in series to the Symbolism of the Descent of Ganga (Gangavataran) in which I explained the deeper symbolism hidden in the descent of the River Ganga from the highest heaven and its manifestation upon earth. Here I have explained the importance of the river as a purifier and liberator. I may keep improving this essay as the knowledge of the Ganga flows into my mind. Jayaram V

Those who are familiar with the beliefs and practices of Hinduism know that the River Ganga is the most sacred river for Hindus. People strive to make a pilgrimage to the banks of the river and immerse themselves in its water under the belief that whoever takes a dip in its waters will get rid of their sins and achieve liberation. Some of the oldest temples and pilgrim places of Hindus are located on its banks.

Symbolically Ganga also symbolizes purity and the power to purify. There is little doubt that Ganga is the mother of all purifiers. In the spiritual practices of Hinduism, purifiers occupy an important place. In Hinduism the mortal world is considered an impure place since it is infused with death, delusion, ignorance, desires and sinful karma, which envelop the souls like a dark cloud and bind them to the cycle of births and deaths. Since the minds and bodies are infused with them and subject to the modifications of Nature, they are also considered impure. Liberation is not possible unless the souls become purified and find an escape from them.

Hence, a great emphasis is placed in Hinduism upon the purification of the mind and body through transformative practices and techniques such as yoga and Tantra. Without cultivating purity, none can become enlightened or liberated. The waters of Ganga symbolize the power to purify mortal beings. Like the flow of water that never stagnates she purifies all that she touches.

Symbolic significance of River Ganga as a purifier

As the purifier and liberator of souls, the River Ganga symbolizes the following symbols and sacred objects of Hinduism.

1. Knowledge of the Vedas

Ganga symbolizes the spiritual knowledge of the Vedas. The knowledge eternally flows in the highest heaven, just as Ganga flows. That knowledge cannot be sustained by humans or directly transmitted to them without the intervention of a spiritual teacher (or guru), or an enlightened Brahman priest, who acts as the intermediary and translates it into human speech, just as Shiva acted as the shock absorber and transmitter in case of the descent of Ganga.

The knowledge of the Vedas thus transmitted not only brings peace and prosperity to the humans but also helps them in their liberation. Just like in case of Ganga, whoever come into contact with the Vedas become purified and cleansed of their sins. In fact, like the goddess Ganga, the Vedas offer an easier and popular path for those who are not privileged or who do not have the opportunity to study the Vedas and become liberated. To them, like Ganga, they provide an easier and less strenuous alternative of karma yoga or the yoga of obligatory duties and sacrificial ceremonies (karmakanda).

The ever flowing River Ganga symbolizes the ever flowing Prana or breath in the mortal body. Like Ganga, prana also descends from the highest heaven and enters the human body through the incoming breath. Just as Ganga splits into seven streams after falling upon the head of Shiva, Prana also splits into seven breaths1 after entering the human body. Thus, Ganga symbolizes the flowing and purifying power of breath. In the very name of Ganga is hidden its symbolic meaning of breath. "Ga," means whatever that flows and "anga" means a bodily organ. Ganga literally means that which flows in the organs of the body, which is clearly a reference to Prana or breath. The Upanishads clearly identify Breath (Prana) as the lord of the organs and the highest deity in the sphere of the body because it is incorruptible. While all the organs in the body are susceptible to desires and evil thoughts, breath not only remains impervious to them but also destroys all evil thoughts as soon as they come into contact with it.

Water is invariably used in Hindu rituals, domestic worship, sacrificial ceremonies, and temple worship. Ganga symbolizes the ritual water (tirtham) or the water used on such occasions. In fact, water from the River Ganga itself is preferably used in many Hindu ceremonies. Water infused with the power of Vedic mantras and used in rituals as an offering is considered sacred just like the water from the river Ganga. It is sprinkled upon ritual places, people and objects to purify them and make them fit for worship. Worshippers sip the ritual water to purify their minds and bodies. During the ceremonies it is offered to the deities and poured into the sacrifices as an offering. The remaining water of that offering is also considered sacred.

4. The rain water or the waters of Ambhas

According to Hinduism, rains play an important role in the transmigration of souls and their liberation. Ganga symbolizes rains that fall from heaven, especially the rains that fall during the month of Asvin, which are considered sacred. They represent the waters of life upon earth. Just like Ganga they reside in the water laden heaven (ambhas) and descend to the earth to nourish it and purify it. Just as Ganga liberated the sons of Sagara stuck by the heat of Kapila's penance, rain water liberates the parched earth from the heat of the sun and brings it back to life. Most importantly rain water facilitates the rebirth of souls and helps their parents to perform their obligatory duties and find salvation.

5. The waters of life

According to Vedic beliefs, when beings die, their embodied souls go to the ancestral heaven. After exhausting their karmas, they fall down from there to the earth through rains. From the earth they enter the plants through the same rain water. When men eat them, they enter their bodies, and through the water in the food they become part of their retas (seminal fluid), which is symbolically considered in Vedic imagery as the life giving water. Thus, the rain water from heaven becomes the waters of life (retas ) in the human body. Just as the River goddess Ganga uses the body of Shiva for her support, the rain water, having become the waters of life, uses the human body for its support to facilitate procreation, or the flow of life force (ganga or prana) from one body to another. This process is facilitated by a male sexual organ, which is literally a reference to Bhagiratha, which means the rider or the occupant of bhaga ( the female genital organ).

6. Fluids in the mother's body

Upon sexual union, the male fluid is released into the womb of the mother. Just as the waters of Ganga that flow into the mortal world from heaven, the waters of Ambhas, having become retas in the male body (Shiva), flow into the womb. Symbolically, the mother is a reference to the earth since she is the bearer (dharitri) of the children (praja). Since the male fluid flows (ga) in the sexual organs (anga) of both male and female, it represents Ganga or Prana, or that which flows in the organs of the body. In the body of the mother it unites with the mother's egg and becomes fetus, thereby bringing to life the lifeless womb (the lower world in the body) and sanctifying it, just as the River Ganga did at the time of her descent. In this context, Bhagiratha is a reference to both the father and the fetus. One is the rider of the bhaga (female genital organ) and the other is the occupant of bhaga (mother's womb). Bhagiratha means both. Especially, in this context it is a reference to the fetus of the eldest son. According to Vedic beliefs a son purifies not only his father and mother by taking birth through them but also brings his ancestors back to life by facilitating their rebirth. By giving birth to a son, the mother (symbolically the earth) also become purified, as she discharges her karmic debt to both the father and the son, and the rest of the ancestors.

7. Devayana, the Path of Immortality

As stated before, Ganga symbolizes pure consciousness or the intelligence (prajna) of supreme Brahman. She flows in the heaven as the very essence of Brahman. When she descends into the humans (jivas) through an awakening, facilitated by their penance, intelligence (buddhi) and purity (sattva), she liberates them from mortality and helps the bound souls (jivatmas) to return to the world of Brahman through the path of gods, known as devayana. The path represents the ascent or return of Ganga from the earth back to the highest heaven. She descends into the mortal world through the Southern Path as rains and facilitates rebirth by becoming the waters of life in the body, and life nourishing water in the earth. She ascends and returns to the heaven through the Northern Path (Uttarayana), also known as the Path of Gods (Devayana) or the path to immortality, and carries with her all the liberated souls. In the process she comes to a full circle, like the infinity itself.

From the above discussion we can see that in Hinduism the River Ganga carries a great significance, which only the Vedic seers knew and used a physical river upon earth to symbolize it. Ganga represents the eternal power of Brahman that gives life, nourishes life, purifies life, facilitates renewal and rebirth, and liberates life. In short, she symbolizes life (Prana) itself and all the movement (chaitanyam) that characterizes life and creation. With her roots in heaven and branches below, she even symbolizes the famous Asvattha Tree, or the Tree of Life, which is mentioned in the Upanishads as the tree that is upside down. Like Ganga, the Tree too has its roots in heaven and branches in the worlds below. In the ultimate sense, the River Ganga is not just a river and a flow of consciousness, but creation itself that originates from Brahman as a movement (ga) and descends into the mortal world, (which is but a limb (anga) of creation), through Isvara (Shiva), the lord of the universe, to release the bound souls from the previous cycle of creation and give them a chance to liberate themselves.

1. In earlier Upanishads there is a reference to seven types of breath, but in the later Upanishads you find them to be five only.