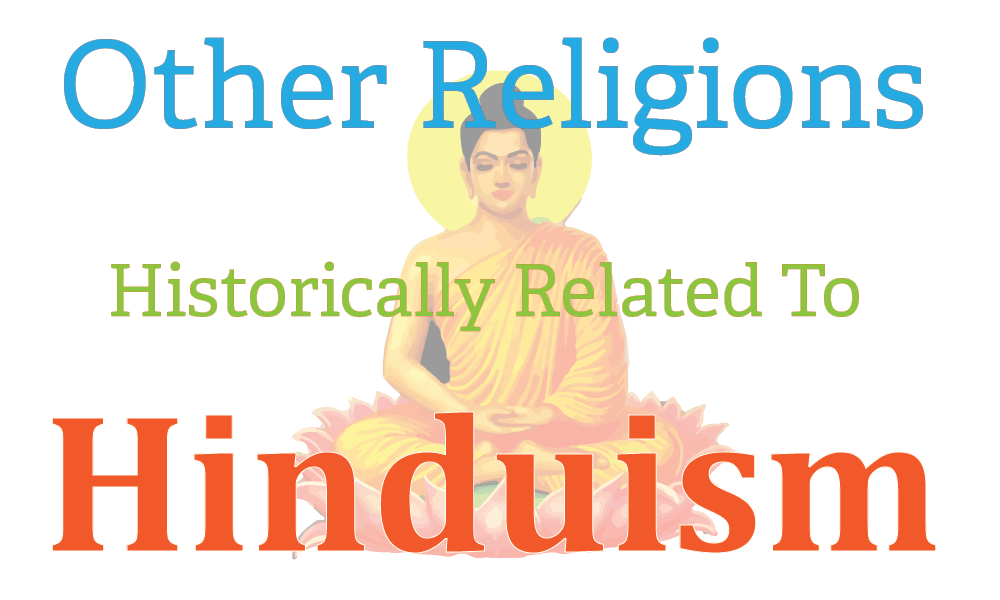 Buddhism, Jainism, Sikhism and Zoroastrianism are major world religions. They share several common beliefs and practices with Hinduism and have millions of followers in the Indian subcontinent as well as the rest of the world. The first three faiths originated in India. Although Zoroastrianism seems to have originated in the Indian subcontinent or adjoining areas, it remained confined to Persia. Both Zoroastrianism and Vedic Religion share several common traditions, beliefs and practices. However, historically they went their ways. We have strong reasons to believe that Zoroastrianism incorporated elements of an ancient branch of Vedic tradition which was prevalent in the outlying areas of the Indian subcontinent or Persia, before Zoroaster established the new faith. Hinduism, Buddhism, Jainism share many fundamental beliefs such as karma, Dharma, rebirth and liberation. They competed against one another, while they also influenced each other and enriched the Indian philosophies, spirituality and mysticism. A comparative study of the four religions is worth the effort to understand the development of religious and philosophical thought in the ancient world, an area which has been largely ignored by the Western academia. It will help students of Eastern religions understand the origin and development of these faiths and the concepts such as Dharma, karma and Maya, which are unique and common to them.

Find here essays on the philosophy of Buddhism, Buddha's teachings and sermons about the Four Noble Truths,  the Eightfold path, important Buddhist concepts such as Anatta and Anicca, and the Buddhist way of life.

This section provides essays on spiritualism, the practice of spiritualism, the meaning and significance of divine centered living, developing the right spiritual attitude that would lead to better awareness and divine orientation, scriptures and more.

This is a general knowledge reference center on interesting facts and figures, prayers, quotations, and links to e-texts, fact books, encyclopedias, literature, dictionaries, almanacs and maps.

A huge collection of translations of many ancient scriptures of Hinduism, Buddhism, Jainism, Sikhism, Zoroastrianism and related subjects.

You will find here a huge collection of links to websites on a wide variety of subjects such as Hinduism, Buddhism, Jainism, Sikhism, Zoroastrianism, spiritualism, self development, Saivism and more. You may also check our web directory for additional links and submit your site to our lists of linked sites.

You will find here Links to online merchants, shops, malls, products, deals, discounts, and coupons from hundreds of merchants in various categories.

Check reviews of exceptionally good books on Hinduism, Buddhism, and related religions and topics besides books on self development and spiritualism.

This is an information center for the news headlines, events, jokes, cooking recipes, latest film reviews, stock quotes, horoscope, health information and more. Get a variety of information in one place.

Hinduism and Buddhism originated in the same geopolitical, social and cultural environment and share many beliefs and practices, with some differences also. In this essay, we discuss the similiarities and differences between the two great traditions of the East.

At one time, during the early Christian era, Buddhism and Jainism attracted widespread following in India and posed a challenge to Hinduism. In this essay, we point out the differences and similarities between the two, and why of the two, Buddhism prevailed in the end.

Hinduism is much older than Christianity. Except for sporadic and local interactions, Hinduism did not face much challenge from Christianity until the arrival of the British. In this essay, we discuss the similarities and differences between the teachings of Hinduism and the doctrine of Christianity.

Of all the religions, Hinduism faced the gravest challenge from Islam during the medieval times when India was occupied by the invading armies of Muslim rules from the North. In this essay, we compare and contrast the two and how they enriched each other despite the hostilities and differences.