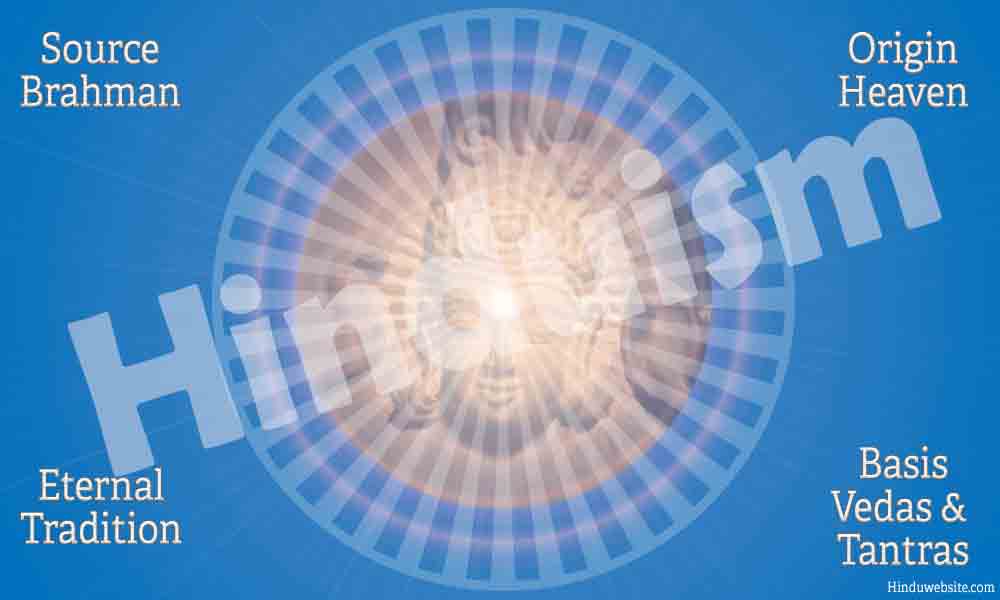 Introduction to Hinduism - A Book

Hinduism is an eternal tradition (sanatana dharma). Its knowledge and wisdom said to exist eternally in the highest heaven in the form of the Vedas.

The scriptures affirm that Hinduism is practiced not only by humans but also gods, by beings of the other worlds and God Himself. From time to time, He descends upon earth as an incarnation or an emanation to increases our understanding of the eternal tradition as part of His duty and as the upholder of dharma.

In fact, from the Bhagavadgita, the epics and the Puranas we learn that God, the Supreme Self, practices Hindu Dharma as His duty, apart from upholding it and enforcing it, even though He is not interested particularly in anything.

He teaches it to gods, demons and humans, according to their knowledge and intelligence, through Brahma, the creator god, because such knowledge is necessary for ensuring the order and regularity of the worlds and keeping them in their respective spheres, without which there would be chaos and darkness.

Hinduism envisages God in many roles. One of them is that of a teacher or revealer. He is the World Teacher, who opens our minds to transcendental truths that cannot be easily grasped without purity and inner awakening.

The Vedas are just a tip of the iceberg

The Vedas constitute the core teachings of Hinduism. They are considered eternal. It is said that in each cycle of creation, God reveals them to the humanity for their welfare.

Why they are important? It is because they contain knowledge of various types of sacrifices that are central to creation and preservation of the worlds and beings. Sacrifices here denote not only ceremonial sacrifices but also all actions we perform internally and externally with an attitude of sacrifice and service.

To live for your own desires and interests is animal nature; to live for others or God with a sacrificial attitude is human and divine. The Vedas point to this ideal. With the help of sacrifices, we can sustain the worlds and ensure our welfare.

It is possible that the Vedas we have today are remnants of a vast body of divine knowledge made available to us in the beginning of creation. We might have lost portions of it as the world progressed and suffered from many catastrophes and upheavals. Some knowledge may still be hidden and revealed in course of time. Men of wisdom may be able to tap into this vast reservoir of knowledge and reveal it to us when the time is due.

Veda means knowledge. The revelations of God are part of this vast body of eternal knowledge stored in the heaven. Knowledge that liberates purifies and uplifts the humanity comes to us from this source only.

We may quarrel about which aspect of it is right because of our desires, attachment or limited knowledge, but in truth, all knowledge whose source is God is divine. In the course of our existence we are introduced to only that part of it that is essential for our spiritual advancement upon earth.

(Source: An Introduction to Hinduism by Jayaram V. Buy This Book

The Laws of Manu

The Yogasutras of Patanjali

The Yoga Sutras of Patanjali

The Upanishads (a translation of selections), trans. by Max M ller

The Upanishads (with commentary), trans. by Swami Paramananda

The Mandukya Upanishad by Swami Krishnananda

The Mandukya Upanishad by Swami Krishnananda

The Laws of Manu, trans. by Georg Buhler

Bhagavad-Gita: Recension by William Quan Judge, Combined With His Essays on the Gita,

Notes on the Bhagavad Gita by Tiruvalum Subba Row

Bhagavad-Gita As It Is, ed. by A. C. Bhaktivedanta Prabhupada

The Philosophy of the Bhagavadgita by Swami Krishnananda

The Hindu-Yogi Science of Breath, by Yogi Ramacharaka - HTML and PDF at arfalpha.com - Gutenberg text

Hinduism and the Baha'i Faith, by Moojan Momen (HTML in the UK)

Hints on How to Organize New Local Councils of Women, by National Council of Women of Canada (page images at canadiana.org)

Hints on the Formation of Religious Opinions, by Ray Palmer (page images at MOA)

Hints to Emigrants, in a Series of Letters From Upper Canada (Edinburgh: Printed for Waugh and Innes, 1824), by William Bell (HTML at globalgenealogy.com)

Hints Toward Reforms, in Lectures, Addresses, and Other Writings, by Horace Greeley (page images at MOA)

Hints Towards the Formation of a More Comprehensive Theory Of Life (London: J. Churchill, 1868), by Samuel Taylor Coleridge, ed. by Seth B. Watson (Gutenberg multiple formats)

Hints Towards the Pacification of Ireland: Addressed, More Particularly, to the Ruling Powers of the Day (London: Charles Dolman, 1844), by John Talbot Shrewsbury (HTML at Wayback Machine)

Hippies From A to Z: Their Sex, Drugs, Music and Impact on Society from the Sixties to the Present (c1999), by Skip Stone (HTML at hipplanet.com)

The Hippocampus as a Cognitive Map (1978), by John O'Keefe and Lynn Nadel (PDF files with commentary at cognitivemap.net)

Hippolytus, by Euripides, trans. by David Kovacs (HTML with commentary at Perseus)

Hippolytus, by Euripides, trans. by Gilbert Murray (HTML at Bartleby)

Krsna: The Supreme Personality of Godhead by A. C. Bhaktivedanta Prabhupada

Peasants and Monks in British India by William R. Pinch

Saddharma-Pundar ka: or, The Lotus of the True Law, trans. by Hendrik Kern

A Course in Vishishtadvaita Philosophy

A Messenger of Peace and Wisdom

A Great Guru And His Ideal Disciple

How to Get Vairagya (Dispassion)

Life and Teachings of Lord Jesus

Lord Krishna, His Lilas and Teachings

Sadhana Tattva or The Science of Seven Cultures

The Role of the Guru

Bhakti Yoga (The Path of Devotion)

Japa Yoga or Mantra Yoga (Repetition of the Lord's Name)

Raja Yoga (The Path of Meditation)

Jnana Yoga (The Path of Enquiry)

Sivananda: The Apostle of Peace and Love By Swami Paramananda (September 8, 2008).

Spotlights on the Ramayana By Swami Premananda (November 12, 2001).

A Message To New Initiates By Swami Chidananda (October 6, 2001).

The Philosophy, Psychology and Practice of Yoga

The Role of Celibacy in the Spiritual Life

Special Insights Into Sadhana No. 1

Special Insights Into Sadhana No. 2

Special Insights Into Sadhana No. 3

Special Insights Into Sadhana No. 4

Special Insights Into Sadhana No. 5

Special Insights Into Sadhana No. 6

Special Insights Into Sadhana No. 7

Special Insights Into Sadhana No. 8

A Call to Liberation

A Guide To Noble Living

Essentials of the Higher Values of Life

The Eye of the Hurricane

Light on the Yoga Way of Life

Meaning and Practice of Meditation

The Intuitive Experience of the Truth

The Presence of the Eternal in Time

Modern Psychology and the Infinite Consciousness

The Metaphysical Nature and Dignity of Man

The Science of Reality and its Aspects

The Secret of Happiness

The Wonders of Love

The Shortest Way to God-Experience

The Secrets of Perfect Life

The Structure of Spiritual Progress

The Nature and Functions of spiritual guides

Integration of Science in the Conception of Omkarananda International Ashram

The Light of Love

The Psychology of the Unfoldment of Higher Consciousness

Fourteen Scientific Reasons Why No One Dies

Endless Is Your Power

Methods for God-Experience in the Bible

How to Divinise All Our Daily Work?

The Practical Psychology of Self-Realisation

The Science of the Divine Word OM

The Experience of Unity in European Mysticism

The Science of Thought-Culture and Divine Perfection

Meaning and Value of Prayer

The Universe and the Dimensions of Knowledge

Art as a Way to God-Experience

A Glimpse of Paramahamsa Omkarananda Saraswati

Omkarananda Ashram Himalayas and its Institutions

Love is the only miracle there is"/The Divine Melody. Chapter 9, Chapter Title: The Pause Between Two Notes, January 9, 1977 am in Buddha Hall.

My Awakening"/The Discipline of Transcendence, Volume 2, Chapter 11. This book is currently out of print. The title "My Awakening" has been added by Realization.org.

From Childhood to Enlightenment, The Birth of a New Man, "Dimensions Beyond the Known" - Osho.       ~Osho on

What is Satori, "Zen: The Path of Paradox, Volume 2" Osho on

Gautam Buddha Enlightenment, “I Am the Gate” -Osho

Enlightenment of Osho's Father, "Be still and know" - Osho Osho on

Characteristics of Samadhi, " Zen: The Path of Paradox, Vol 3 "

Total Effort and Total Relaxation for Enlightenment, “Vedanta: Seven Steps to Samadhi” by Osho Osho on

False Buddhahood, “Zen: The Path of Paradox, Volume 3” by Osho Help of an Awakened one is essential.

First Energy Becomes Formless, Desireless, and Then it Becomes Bodiless,"A Bird on the Wing " by Osho

Education and the Significance of Life"

The Flame of Attention"

The Awakening of Intelligence"

As They saw 'RAMA'

Preface to the First Edition

The Infinite in the Finite

The Sun Of Self On The Wall Of Mind

Sin Its Relation To Atman

Prognosis And Diagnosis Of Sin

The Secret Of Success (Japan)

The Secret Of Success (U.S.A)

The Nature Of Inspiration

The Way To The Fulfilment Of All Desires

The Spiritual Power That Wins

The Complete Works of Swami Vivekananda

Response to Welcome At The World's Parliament of Religions

Religion Not The Crying Need Of India

At the Final Session

Powers of the Mind

Man The Maker Of His Destiny

Man the Maker of his Destiny Part 3

Man the Maker of his Destiny Part 4

Compiled by Jayaram V for Hinduwebsite.com