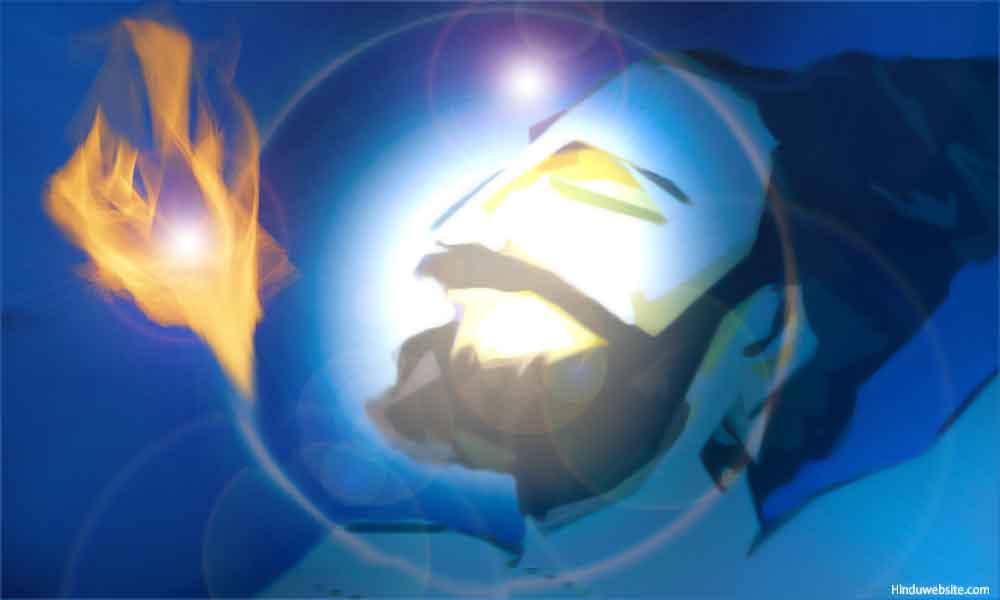 1. Then Asvalayana approached the highest Lord (Brahma) and said: teach me O Lord the knowledge of Brahman, the highest, the hidden, which is always venerated by the wise, and by means of which a wise man, cleansing all his sins, reaches the highest.

2. To him the Great Father (Brahma) said: know (that supreme knowledge) by faith, devotion, meditation and yoga. Neither by works, nor by offspring, nor by wealth, but only by means of renunciation can the life eternal be attained.

Brahma is one of the gods of Trinity created by Iswara to carry out the task of creation. He should not be mistaken with the Brahman of the Upanishads.

3. Higher than the heaven, hidden in the cave, it shines. Those who make strenuous effort enter into it.

4. The ascetics who through renunciation and with pure minds strive to affirm the truths of the Vedanta become liberated in the end because of the supreme state of immortality they attain.

5. Seated comfortably in a secluded place, observing purity, keeping the head, the neck and the body in a straight line, leading the final ashrama dharma of his life, controlling all the senses, bowing with devotion to the teacher.

According to Hindu way of life, there are four ashramas or phases in the life of an individual, namely brahmacharya (the phase of study and celibacy), griahsthashrama (the phase of a householder), vanaprastha (the phase of withdrawal into the forests) and finally sanyasa (the phase of complete renunciation of worldly life). The practice of meditation which is prescribed here is meant for those who have reached the final phase of renunciation and are ready for kaivalya or aloneness.

6. At the center of the lotus of the heart, meditating upon that which is pure, without passion, clear, without sorrow, unthinkable, unmanifest, infinite in form, auspicious, peaceful, eternal and the cause of Brahma.

7. Without a beginning, middle or an end, who is one, all pervading, of blissful consciousness, without form, wonderful, seated with the goddess Uma, the Supreme Lord, the ruler, bearing three eyes, with a blue neck, ever peaceful - by meditating upon Him the sages attain the source of all creation, the witness of all and that which is beyond all darkness.

As in Svetasvatara Upanishad, here also we see clear reference to Lord Siva as the very Brahman.

8. He is Brahma, he is Siva, he is Indra. He is the imperishable, supreme self illumined Lord. He alone is Vishnu. He is the life giving breath. He is time, he is fire, and also the moon.

9. He alone is all this, all that was and all that will be and eternal. Knowing him one surpasses death. There is no path other than this to liberation.

10. By seeing the self in all beings, and all beings in the self, one attains the transcendental Brahman, not by any other means.

11. With the usual self as the lower portion of the fire stick and the syllable AUM as the upper part of it, by the practice of generating the flame of knowledge, the wise burns all his bondage.

The reference to pasa in this verse confirms the fact that the Upanishad is familiar with the basic concepts of Saivism.

12.That alone becomes the deluded self and staying in the body indulges in actions. In the wakeful state it gets gratification through such enjoyments as women, food and drink.

13. In the dream state, the jiva experiences happiness or sorrow in a make believe world created by his own maya. In deep sleep, when all is absorbed, he experiences sukham (happiness) under the influence of darkness.

When the jiva is in deep sleep, all his troubles are temporarily suspended because under the influence of tamas he simply becomes ignorant of everything. This ignorance, though for a brief period of time, gives him a little break from the harsher realities of the wakeful state. The sukham that is referred in this verse therefore is not a positive state of mental happiness, but a negative state of temporary respite from the vagaries of the mind.

14. Again the jiva on account of his deeds in previous lives wakes up and sleeps. He takes delight in the three cities. From him springs all diversity. He is the support, bliss, indivisible consciousness and in him alone dissolve the three states.

15. From Him are born the vital breath, mind, all the sense organs, the sky, air, fire, water and the earth, which supports all.

16. That which is the supreme Brahman, the self of all, who supports the entire universe, subtler than the subtle, eternal, that alone you are, you are that alone.

17. That by which the waking, dream and deep sleep worlds are illumined that Brahman I am. Knowing thus one is freed from all fetters.

18.I am the witness, pure consciousness and Sadasiva (the ever auspicious) and different from whatever that exists in the three worlds as the enjoyer, the enjoyment or the object of enjoyment.

20. I am smaller than the atom. So also I am greater than the Universal Self. I am utterly amazing. Ancient. I am the Purusha. The Lord of the golden hue, I am Siva in manifestation.

21. I am without hands and feet, but with unthinkable prowess. I see without eyes and hear without ears. I know. I am formless, unknown to any and always pure consciousness.

22. From the different Vedas I am the one to be known. I am the author of the Upanishads and the knower of the Vedas. Merit or demerit do not attach to me. I am indestructible, and I am not subject to birth, body, sense or intellect.

23. Earth, water, fire, air, ether I have none. Knowing the true nature of the Supreme Self, the one who dwells in the cave of the heart, without impurities, without duality, the universal witness, free from (the distinction of) being and non being, one attains the being of the Supreme Self.

The divine consciousness is above and beyond the physical properties of life which is characterized by the presence of the five elements. Hence the expression that these elements are not present in Him.

Theoretically here ends the first part of this Upanishad. But there is no second part. Probably either it is lost to us or its revelation might have been discontinued. At the end of the so called first part however there are two more verses which are described below. Probably they are the later day editions giving the Upanishad a definite Saivite twist.

24. He who studies Satarudriya becomes purified as fire, becomes pure as air, becomes purified from (the sin of) drinking wine, from killing a Brahmana, from stealing gold, from all deeds and misdeeds. Therefore he should take refuge in the Avimukta. He who is in the final ashrama dharma (the phase of renunciation) of his life should always chant this text at least once.

Satarudriyam is a prayer of 100 stanzas from the Taittiriya Samhita of Yajurveda as an invocation to Rudra or Siva. It is considered to be very sacred by the followers of Saivism. Avimukta means that which is free from the need for freedom. It is God who alone can qualify to fit into this description and in the context of this particular verse, it is Lord Siva who is referred. The final ashrama dharma that is referred here is the sanyasa ashram or the phase of renunciation. As we have seen else where, Kaivalya Upanishad is obviously meant for the aged who have renounced the worldly life and awaiting their final journey.

25. By this knowledge comes the destruction of the ocean of births and deaths and therefore thus knowing he attains the fruit of kaivalya (final dissolution.)