Symbolism in the Bhagavadgita - Main Participants 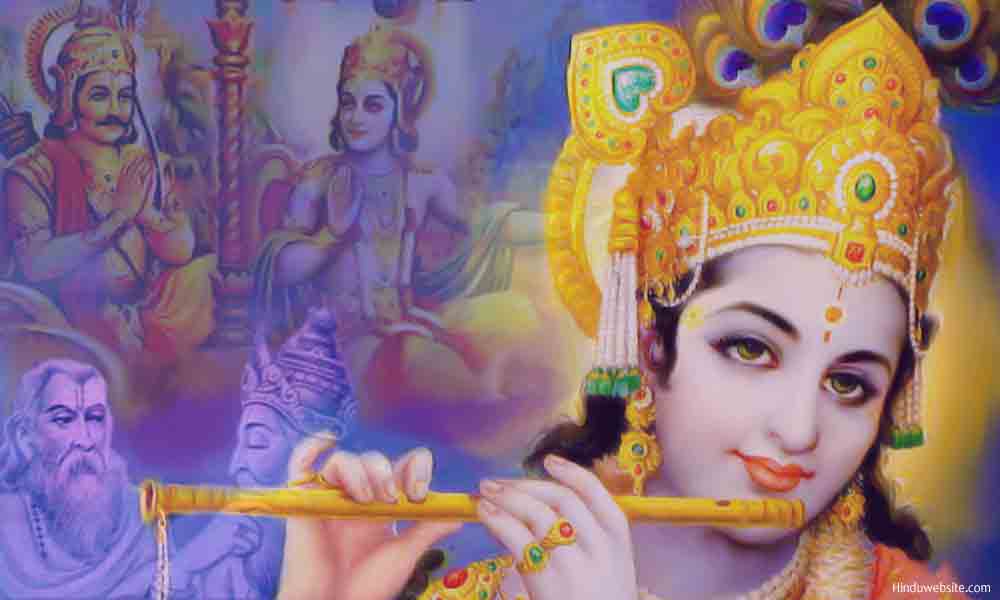 The symbolism in this essay is original and received through intuition. Jayaram V

A study of the Bhagavadgita is mentally and spiritually beneficial. It contributes to your knowledge and understanding of Hinduism and the Hindu way of life. The scripture is essentially a summary of the main beliefs, principles and practices of Hinduism. They are presented in the scripture from a spiritual perspective for the guidance and liberation of the devotees of God (Bhagavatas).

While we do not know when it was originally composed and whether it was composed in stages, it seems that it gained popularity in the early Christian era, in response to the growing popularity of Buddhism and Jainism, during the period when Mathura, the birthplace of Lord Krishna, and its adjoining areas came under the sway of foreign rulers like Sakas and the Kushanas. The growing popularity of the epic Mahabharata might have also contributed to it.

It is because the scripture is part of the Mahabharata. Hence, it authorship is attributed to Vyasa. The setting is Kurukshetra, the battlefield, right before the beginning of the great war. It contains the conversation between Krishna and Arjuna, which happened in the middle of the battlefield, right in front of two armies. Hinduism views war from the moral, ethical and spiritual perspectives as the conflict between good and evil and reflective of the very nature of life in which one is at war with various forces of Nature. For the same reason, the Bhagavadgita is delivered to us with war as the backdrop and suffering as its outcome.

The significance of the Bhagavadgita

The Bhagavadgita is probably one of the most dissected, discussed and debated scriptures of Hinduism, especially in modern times. Those who regularly read its verses and contemplate upon them as part of their religious or spiritual practice gain newer insights and knowledge with each reading. It is as if the text has a purifying and calming effect upon people who open their minds to it and look for answers to their personal and spiritual problems.

Presented as a dialogue (samvadam) with four participants or main characters, it is also considered a secret teaching (Upanishad) and a treatise on Yoga (yoga sastram). In the long discourse, Lord Krishna covers various approaches to liberation and explains the nature of Self, the mind, body and senses, the relationship between God and Nature, dharma, karma, bondage, rebirth, afterlife, renunciation, detachment, gunas or modes of Nature, devotion, manifestations of God, and how to engage in obligatory duties without incurring sin and karma.

The text contains 18 chapters and 699 or 700 verses. Although it serves people of all ages and backgrounds, it is primarily a guide book for the Bhagavatas or the servants of God to perform their duties in the service of God and work for their liberation. For worldly people it is a source of inspiration. For the devotees of God who believe in karma and rebirth it is indispensable to cultivate purity and stabilize their devotion.

The verses make an excellent reading for contemplation and meditation, besides providing practical guidance to those who are looking for solutions about existential problems such as karma, sin, attachments, suffering and bondage to the cycle of births and deaths. The scripture also has a hidden symbolism, which is why it is considered the secret of the secrets. Even the seemingly most inconsequential verses in it may have deep symbolic meaning, discernible only to those whose minds and bodies are pure and whose intelligence reflects the purity of the Self.

Symbolism of the four main characters of the Bhagavadgita

Although the scripture is voluminous, it has only four main participants, which seem to be intentional. Each of the four characters of the Bhagavadgita represents deep symbolism about the states of mind and how knowledge descends into human consciousness from the higher planes. Each of them characterizes a particular state of mind, attitude, spiritual approach and aspect of the mind and body. They also exemplify the four main methods of knowing or receiving spiritual knowledge, or how divine knowledge is transmitted to us from transcendental planes. In the following discussion we mainly focus upon the symbolic significance of the four main characters of the Bhagavadgita and what they represent.

The four main characters of the Bhagavadgita are:

Symbolically, in the macrocosm the four characters represent four divine realities (tattvas) as shown below. Of them, the first two are eternal, infinite and indestructible realities, and the last two are finite, relative and destructible.

In the microcosm of each living being, the four participants represent the following four aspects.

From the perspective of Dharma, Arjuna and Dhritarashtra were householders, while Sanjaya was a renunciant. Although both were householders, they had different temperament and attitude. Arjuna had devotion to God. His attitude towards him was positive, and he had pure faith. Dhritarashtra too had devotion, but his attitude was negative and resentful, and his faith was weak and impure. Hence, Arjuna earned the grace of God and the opportunity to directly receive the knowledge of liberation while Dhritarashtra had to remain content with an indrect learning through a seer.

The four methods of knowledge transmission

Krishna represents the all-knowing, self-existing knowledge or awareness. In him, knowledge is eternal and inherent. As the all-knowing, Supreme Self and as the universal teacher he is the source of all teachings, scriptures, and knowledge of liberation. According to the Upanishads, union with God leads to omniscience. Union means dissolving all barriers and becoming one with God’s consciousness. If you completely merge your consciousness and individuality in God and lose all sense of separation and duality, you enter the omniscient state of God as God himself. In short, to become omniscient you must cease to exist as an entity and overcome duality. When you disappear even briefly, God appears in that moment as your very Self. When there is only the knower, knowledge becomes self-evident. During the discourse Lord Krishna was in such a transcendental state. He had no sense of duality or separation. He was one with Brahman, and he spoke and acted like Brahman himself

2. Knowledge through Grace and devotion

Arjuna represents the learned knowledge, which comes by studying, hearing, contemplating and discussing. He directly received the knowledge from God. Because of his past lives and good karma, he earned his trust and love. A devotes becomes closer to God, as he increasingly becomes Godlike by cultivating divine qualities. Arjuna represents the direct method in which devotees receive transcendental knowledge through the grace of God because of their love, purity and devotion. The direct method, which Arjuna represents, is possible only to few individuals, who reach perfection after innumerable births. In the history of the world, few individuals ever had an opportunity to directly converse with God or see him in person. Arjuna not only listened to the long discourse but also saw the universal form of God.

Sanjaya represents the intuitive knowledge, which arises from long and arduous spiritual practice, predominance of sattva and inner awakening. He was a man of great character and virtue who chose the arduous path of renunciation for liberation. Since his heart and mind were pure, he intuitively or psychically received the knowledge from Lord Krishna. Sanjaya, was not as lucky as Arjuna to earn the divine grace. However, he was a yogi who had mastered his body and mind so that he was able to receive the knowledge through his supernatural powers (siddhis). History is replete with instances where human beings received divine knowledge through their higher faculties. The Vedic seers received the knowledge of the Vedas through this method only. They did not see Brahman, but they remotely heard him. The knowledge so received by spiritually pure beings helps ignorant people like Dhritarashtra to perform their duties and live righteously

Dhritarashtra represents ignorance, confusion, clouded judgment and deluded knowledge in which the truths of existence are not readily perceived or understood. He was a blind king who always harbored envy, resentment and sorrow for his predicament. His blindness personifies egoism, which is also the nature of the ego. He received the knowledge through his senses, mind and speech from Sanjaya. It is the standard method, by which human beings receive spiritual knowledge from learned and knowledgeable people. However, it is doubtful whether such knowledge leaves any lasting impression upon them unless they put it to practice. An imperfect soul, driven by his desires and deeply attached to his family and kingdom, it is well known that it was actually his blind passion for the throne of the Kuru empire and his hidden partiality for his children which ultimately led to the battle of Mahabharata.

Apart from the four participants, the Bhagavadgita also mentions the armies of Kauravas and Pandavas and several great warriors. They did not participate in the conversation, nor had they any idea of what was going on. They stood there as silent spectators in a combat mode, waiting for the war to begin and their minds focused on the enemy. Like the four participants, they too have a deep symbolic significance. The battlefield of Kurukshetra symbolizes the field (Kshetra) of Nature. In the macrocosm it represents the world itself and in the microcosm, the body.

The army is the manifestation of Nature and represents its diversity. The war itself symbolizes the God of Death (Kala), who is the ruler of the world and owner of the field (Kshetrajna). In the microcosm of the beings, the armies of Pandavas and Kauravas represent the organs of the body (karmendriyas) who are engaged in both good and evil actions under the influence of the triple gunas. They do their work sincerely, but do not have any knowledge of their own about the nature of existence or the body. They obey the commands of the mind and body and engage in actions according to the gunas and desires, but lack the will of their own.

In the macrocosm of the world, they represent the diverse beings (jivas) of creation, who are engaged in their actions and preoccupied with their own lives. Although they actively fight the battles of life, they are oblivious of the presence of God and his actions amidst them. Under the influence of Maya, they may see him but do not recognize him. It is the way of the world and it is how probably the Divine casts the net of Maya to ensure the order and regularity of the worlds.