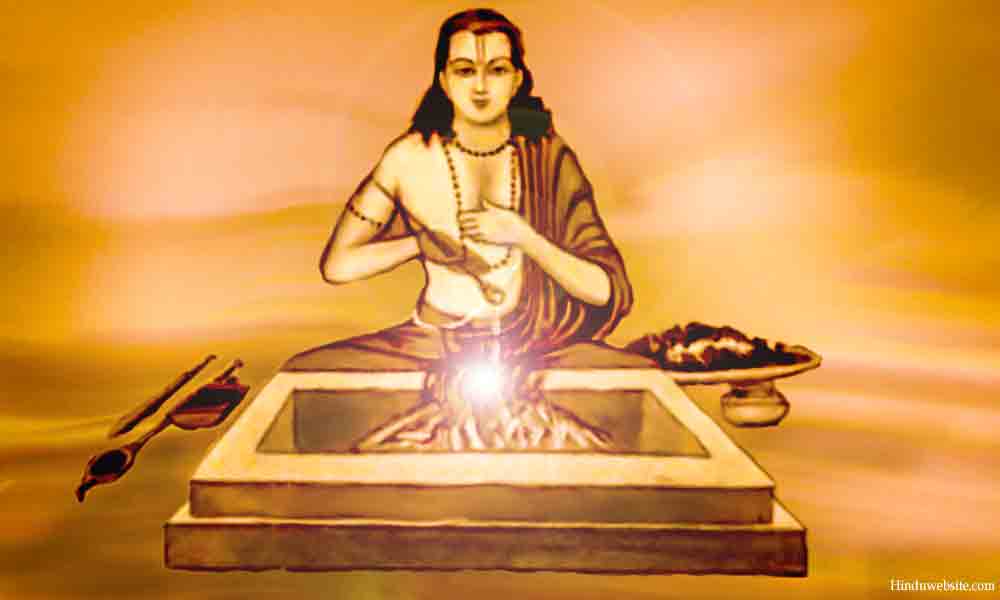 In Hinduism, rituals are meant to inculcate feelings of devotion and religiosity and thereby bring God and spirituality into the center human life. As a part of his householders responsibilities, a devout Hindu is expected to perform certain rituals every day starting from morning till evening.

Some people do not like to use the word rituals to denote Vedic religious activities since the word ritual implies certain mechanical attitude and lack of serious involvement. Vedic sacrifices are integrated into human life and although they are meant to be performed with certain regularity, their ultimate purpose is not mere observance but transformation of the mind and body so that the person becomes a fit vehicle to manifest the intent and purpose of God in creation.

Devout Hindus perform daily scarifies and make oblations or offerings of water to various deities at different times in the day. The morning sacrifices include bathing or physical self-purification, offering prayers to the Sun, chanting of the Gayatri mantra, applying certain specific religious marks on the body etc. The marks may differ from person to person depending upon his caste and sect affiliations. In addition, devotees may also observe rituals that are specific to the teacher traditions they follow. Such daily observances are especially meant for householders. Hindu ascetics (sanyasis) may also follow certain daily rituals and worship gods or their teachers, but they differ from those of the householders.

While it is true that most of these practices are obligatory for the upper castes and many still follow them, Hindus follow diverse rituals according to their beliefs, social status, availability of time, family traditions, and other factors. Many ancient rituals and practices, which were once obligatory are now discarded for various reasons. Some cannot be performed today since people live in cities and the conditions do not permit them to stick to the discipline prescribed in the scriptures to perform them. Besides the rituals also require detailed knowledge, beside money and time, which many people lack. Hence, many rituals have been either discontinued or replaced by short and simple practices, reflecting the changing nature of Hindu society.

Among the daily rituals that are currently practiced in many Hindu households, the most popular ones are puja, meditation, silent prayers, yoga, recitation of scriptures like the Bhagavadgita or bhajans, reading religious books, participating in "satsang" or visiting the company of holy men, doing some charitable work, visiting temples and holy places, or chanting of some mantra or the name of a specific god.

The religious marks which the devout Hindus used to apply in the past on various parts of their body in a manner prescribed by the scriptures, have now become a rare sight and in some cases have been replaced by a simple mark called tilak either on the forehead or between the eye brows.

Many modern Hindus do not wear any religious marks at all on their bodies, or are shy of wearing them, though the women still sport a tilak on their foreheads. It is however not entirely incorrect to say that many of them do so out of habit and as a part of make up rather than out of any specific religious consideration. The trend is catching up in the west also and many wear tilak as a matter of fashion not knowing its true spiritual significance !

These are the outer forms of worship in Hinduism, reminders of its direct connection with the Vedic religion of the ancient past. During the performance of the yajnas, offerings are made to different deities in a prescribed and systematic manner by qualified priests to supplicate them, so that they would assist the worshipper in achieving certain results in life.

The chanting of mantras while performing the sacrifices is expected to ensure fulfillment of specific desires, the overall welfare of an individual, a group of people or the entire society.

The simplest form of yajna is the domestic ritual performed by the householder who would offer simple oblation into the sacred fire lit in his house. A more complicated version involves setting up of three to five fires and pouring of offerings into them such as food grains, ghee or butter, and other vegetable substances by chosen and qualified priests, chanting mantras simultaneously, invoking various gods especially Agni, Indra, Varuna etc.

Some yajnas are performed on large scale for the general welfare of the entire community, to increase fertility of soil, to invite rains, to welcome peace and wealth etc. Depending upon the degree of complexity, these yajnas may last from a few hours to several days. The number of priests participating and conducting the ceremony would depend upon the nature and objective for which it is performed.

It is a fact that the incidence of performing the yajnas and other forms of sacrifices is slowly coming down in modern Hinduism, primarily because of the influence of western education, the complexity involved in performing them and the decreasing number of qualified priests who can perform yajnas effectively according to the full Vedic injunctions.

Japa has become a very popular form of worship in modern day Hinduism. Especially with the rise of bhakti movement and the popularity of many yogis and babas, japa has entered the hearts and minds of many devout and spiritually inclined Hindus. Japa means continuous recitation of God's name either silently in ones mind or aloud in a group. Continuous recitation of God's name is expected to purify the mind of the devotee and fill his consciousness with divine thoughts and vibrant spiritual energy. The regular chanting is expected to create certain vibrations in the body and mind which would facilitate the spiritual transformation of ones ordinary self.

In Hinduism, from earliest times, heavy emphasis has been laid on proper recitation of the Vedic mantras and slokas. Even today in the Vedic Schools, the students would spends hours, days and years trying to capture the subtle nuances of Sanskrit pronunciation. In japa, we do not come across any such rigidity. The individual has ample freedom to practice it according to his convenience and inner prompting. The practice of japa is therefore in line with this very ancient tradition, but devoid of the pedantic approach common to the chanting of the Vedic mantras.

However there are certain rules. One should practice japa either for ones own welfare or for the welfare of others, but never to harm or injure others. It is better if it is done out of pure love for God rather than for any selfish purpose. Thirdly to be effective, the chanting should begin with the sacred syllable "AUM".

AUM is considered to be a very sacred word. It is Sabda Brahman, the very Brahman itself in the form a word. It imparts divinity to every thing it touches. So when it is joined with another word as prefix, the word becomes divine in nature and when it is uttered it creates certain vibrations which have the ability to transform the consciousness. Therefore in Hinduism all chanting is preceded by the use of this sacred syllable "AUM".