Nine Tattvas Or Principles of Jainism 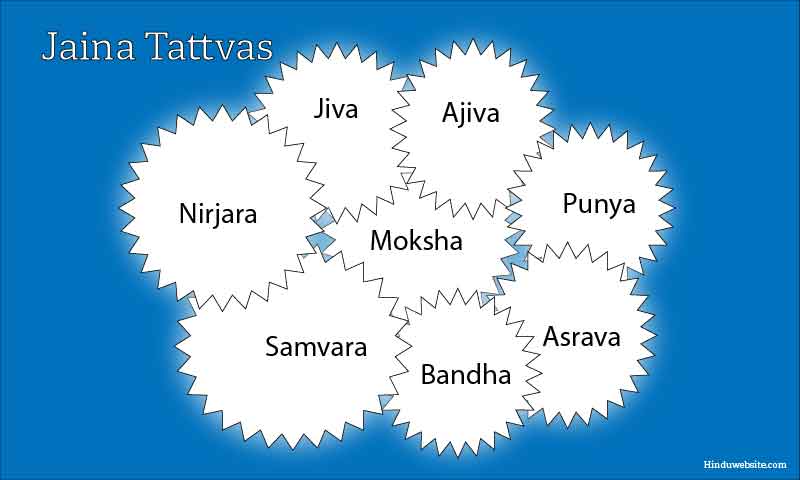 The nine tattvas, or principles, are the single most important subject of Jain philosophy. It deals with the karma theory of Jainism, which provides the basis for the path of liberation. Without the proper knowledge of this subject, a person can not progress spiritually. The true faith and understanding of this subject brings about right faith (samyakdarshana), right knowledge (samyakjnana), and right conduct in an individual.

1. Jiva soul or living being (Consciousness)

3. Asrava cause of the influx of karma

7. Samvara arrest of the influx of karma

8. Nirjara exhaustion of the accumulated karma

* Punya and Papa are the diverse results of Asrava and Bandh. Some exponents of Jains do not treat them as separate tattvas. According to them, there are only seven principles instead of nine.

3. Asrava (Cause of the influx of karma)

In addition to the above causes, the five great sins; violence, untruth, stealing, sensual indulgence, and attachment to worldly objects are also the cause of the influx of karmas.

Bandha is the attachment of karmic matter (karma pudgala) to the soul. The soul has had this karmic matter bondage from eternity. This karmic body is known as the karmana body or causal body. Karmic matter is a particular type of matter which is attracted to the soul because of its ignorance, lack of self restraint, passions, unmindfulness, activities of body, mind, and speech. The soul, which is covered by karmic matter, continues acquiring new karma from the universe and exhausting old karma into the universe through the above mentioned actions at every moment. Because of this continual process of acquiring and exhausting karma particles, the soul has to pass through the cycles of births and deaths, and experiencing pleasure and pain. So under normal circumstances the soul can not attain freedom from karma, and hence liberation.

Prakriti Bandha When karmic matter attaches to the soul, karma will obscure its essential nature of:

Prakriti bandha is classified into eight categories, according to the particular attribute of the soul that it obscures.

Ghati and Aghati karmas The above eight karmas are also categorized into two groups, known as ghati and aghati karmas.

Ghati Karmas: Jnanavaraniya, Darasnavaraniya, Mohaniya, and Antaraya karmas are called Ghati karmas (dangerous karmas) because they obscure the true nature of the soul.

Aghati Karmas: Ayu, Nama, Gotra, and Vedniya karmas are called Aghati karmas. They do not obscure the original nature of the soul. However, they associate with the body of the soul. Hence they can not destroyed by the soul so long as it possesses a body.

When a person attains kevaljnana, he is known as an Arihant. If an Arihant establishes the four fold order of Monks, Nuns, Sravaka, (male layperson), and Sravika (female layperson) then the Arihant is called a Tirthankara. Other Arihantas are known as ordinary Kevali. After Nirvana (death) both Tirthankaras and ordinary Kevalis are called Siddhas.

All Siddhas are unique individuals, but they all possess perfect knowledge, vision, power, and bliss. Hence from the qualities and attributes point of view all Siddhas are same.

Sthiti Bandha When karmic matter attaches to the soul the duration of the attachment is determined at that time according to the intensity or dullness of the soul's passions.

Anubhava Bandha or Rasa Bandha What fruits the karmic matter will produce is determined at the time of attachment by varying degrees of passions.

Pradesa Bandha The quantum of karmic matter that is drawn towards the soul for attachment is determined by the intensity or dullness of the soul's action.

The influx of karmic matter due to good activities of the mind, body, and speech with the potential of producing pleasant sensations is called punya or virtue.

The influx of karmic matter due to evil activities of the mind, body, and speech with the potential of producing unpleasant sensations is called papa or sin.

The method which arrests fresh karma from coming into the soul is samvara. This process is a reverse of asrava.

It can be accomplished by constant practice of: restraint of mind, body, and speech religious meditation conquest of desire forgiveness, tenderness, purity, truth, austerity, renunciation, unattachment, and chastity

Nirjara is the exhaustion of karmic matter already acquired. The karmas exhaust themselves by producing their results when it is time for them to do so. Unless they are exhausted before they are mature and start producing results, it becomes difficult to be free. By that time, new karmic matter begins to pour in. Therefore, it becomes necessary for one who desires final liberation to exhaust all karmas before maturity. This is called nirjara. Nirjara is to be done by rigorous austerities.

Internal Nirjara: Prayaschita repentance for the breach of vows

Moksha is the liberation of the living being (soul) after complete exhaustion or elimination of all karmas. A liberated soul regains totally its original attributes of perfect knowledge, vision, power, and bliss. It climbs to the top of Lokakas and remains there forever in its blissful and unconditional existence. It never returns again into the cycles of birth, life, and death. This state of the soul is the liberated or perfect state, and this is called "Nirvana."