Shiva Sutras, The Aphorisms of Shiva 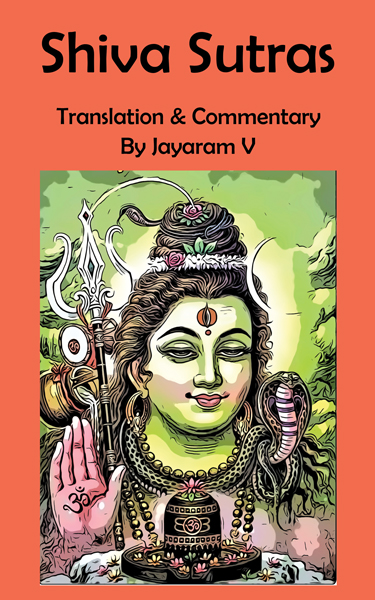 Author's note: According to tradition, the Shiva Sutras, Aphorisms of Shiva were found engraved on a stone by Vasugupta, who probably lived in the 8th century AD, which became the basis for Kashmiri Shaivism. This is an easy or flexible Translation of the Shiva Sutras, which is included as a separate section in the Kindle Version of the book by the same name. By free or easy translation I mean this is not a strict word to word translation. The sutras are translated in such a way as to reflect their essence of central idea. In a way, they summarize the commentary. The Kindle version contains both strict and flexible translations.

The self is the essence of all. It is pure consciousness, knowledge, intelligence, awareness, vitality, sensation, which pervades the whole existence.

Worldly knowledge which arises from the activities of the mind and senses and infused with maya is the source of bondage.

The body is made up of womb-born tattvas such as Kala, Niyati, ego, mind, intelligence, senses, etc.

The letters and letter-forms and sounds in the alphabet of Sanskrit are filled with the knowledge and power of Shakti.

In the silence between two thoughts or two consecutive movements of the mind during contemplation, the illumination of Bhairava (Brahman or Shiva) manifests.

Wielding the power hidden in the Shakti chakras, one should render the objective world as nonexistent or immaterial.

Turya enjoyment is possible in the transitional period between jagrat, svapna and susupta, just as you are falling asleep or entering a dream or waking up from deep sleep.

The knowledge which arises from the wakeful consciousness is jagrat knowledge. It is essentially perceptual knowledge, subject to duality, delusion, egoism, division, separation, and ignorance.

The knowledge which arises dream (svapna) consciousness is vikalpa, imaginary or fantasy knowledge. It too is subject to the influence of maya and delusion.

The knowledge which arises in deep sleep (susupta) is indistinct and bereft of knowledge and intelligence. It is completely filled with maya. Hence, nothing can be known about it.

As the lord of the mind and senses, Shiva is the enjoyer of all the three states. He is the one who remains awake, who dreams and who fall asleep in the body in the embodied state as a part of his play, untouched by any of them.

Wondrous and blissful is the state of turya, the transcendental state, which intermittently arises during the practice of yoga, filling one with amazing feelings.

Uma Kumari is your will power. She is a virgin goddess who should not be used for selfish enjoyment or fulfil your desires. If you do, you will be subject to her anger, and incur karma and sin.

The body is the visible self. It houses the true self, which is invisible. You should not consider your body to be the self, just because you perceive it and become attached to it. Know that it is just an outer covering.

When you purify your consciousness, which flows through the nadis, the heart and the chakras, you will discern the truth about the wakeful and dream worlds and see them as they are, without being deluded by them.

By meditating upon the pure self, you can cleanse your mind and body, suppress the maya shaktis and overcome your animal nature, which is the cause of delusion, egoism, ignorance and bondage.

Through contemplative, meditative and systematic inquiry into the nature of self with discernment, separating what self is and what self is not, you will gain the knowledge of the self

With meditation upon shakti, one attains the power to create a new being with a body or transform an existing body or appear in different bodies at the same.

Through practice, a yogi develops the power to unite or separate elements and bring together various things to create a world out of them.

With the onset of seeing the pure self in all, which is known as shuddha vidya, one attains the siddhi or power of lordship over the the energy centers called chakras in the body.

By reaching the great lake of pure consciousness wherein resides the great Parashakti called the Maha Hrda, one experiences the awakening of shaktis who are hidden in the sacred letters and sounds.

Through willful and pointed effort, a yogi succeeds in invoking and becoming the lord of the shaktis who are hidden in his consciousness and in the mantras upon which he meditates with one pointedness.

The secret of the mantra is its body which has knowledge as its moving force. A yogi who illuminates his chitta and mental body with pure knowledge develops a similar power and gains lordship over the mantra shaktis.

From the flowering of the chitta in an impure body which is filled with maya, there arises dreamlike indistinct knowledge with limited powers.

With the natural advent of vidya, there is illumination of the consciousness with khechari and the attainment of Shiva state and pure knowledge.

The guru is the means to overcome the impurities of the mind and body, awaken the mantra shaktis who reside in the matrkas and attain the pure consciousness of the self.

With the help of an adept guru, a yogi gains the knowledge of matrka chakra and how to harness the mantra shaktis who are hidden in the sound forms of speech for self-purification and self-realization.

The body is the oblation in the sacrifice of self-purification in which the impurities of the mind and body are poured in to the fire of knowledge as an offering to the shaktis who participate in it.

When the knowledge is thus destroyed in the sacrifice of self-purification, the yogi experiences the world as a dream of Shiva and his body as a formation. He realizes their illusory nature and becomes established in pure knowledge.

By nature, the embodied self is also consciousness only. However, it is limited and impure due to its association with the tattvas in the body and the presence of maya who veils its illumination and purity.

The knowledge which arises from the internal organ (the mind, the senses, intelligence and ego) is binding because it causes duality, delusion, egoism, attachments and bondage to samsara.

The ignorance of various tattvas such as kala, etc., which make up the body which are responsible for suffering and bondage and mistaking them as the real self, this is delusion.

Destroying the impurities in the tattvas such as kala and renouncing them, one should engage in the purification of the body.

By dissolving the impurities in the nadis and removing the blockages in them, one gains the power to control, dissolve and separate the elements in oneself and in creation.

One may gain supernatural powers through nadi samhara, bhuta jaya, etc., while still being veiled by delusion, but not the knowledge of the pure tattva or self-realization.

With unquestionable conquest of māya, one enters the supreme state of Shiva and gains true knowledge (sahajavidya) which is natural to the self.

When a yogi is firmly established in the pure knowledge of the self, the wakeful world becomes secondary to him, like a ray or an extension or projection within himself.

He sees himself as the dance master or actor on a stage set by himself, playing different roles in different forms for his own enjoyment.

The inner self is the stage where he enacts the dance drama.

The sense organs are the spectators in that dance drama.

By controlling intelligence (dhi) and with discernment, using the right means with right knowledge, purity is attained.

By merging with Shiva, the state of freedom is attained in which knowledge arises spontaneously and one has the freedom to exercise his free will and act independently.

As in the body so elsewhere a yogi enjoys unobstructed, unrestrained freedom.

For a self-realized yogi what has spread out or exists outside as his body or the world is not external, but internal only as an aspect of himself and his pure consciousness.

With his mind firmly fixed upon Shiva, a yogi should practice concentration on the seed or the cause to cultivate purity.

Abiding in concentration, with his mind firmly fixed upon the self by the power shakti, he should effortlessly sink into the lake of pure consciousness.

With Parashakti who is now an inseparable part of him, the self-realized yogi manifests creation.

With the dawn of indestructible knowledge, there is the destruction of the causes of bondage to the cycle of births and deaths.

Mahesvari and others of the “ka” group of shaktis become mothers of pashus or beings who are born with animal nature, veiled by maya.

In the three states of wakeful, dream and deep sleep states, the bliss of the fourth state of turya should be dropped like oil.

Through mental absorption (chitta magna) by abiding in the steady state of contemplation (asana), one should reach the self through one’s own consciousness (svachitta).

With the slow movement of prana in the body, there arises the seeing of sameness or the same self in everyone.

A disconnected state of enjoyment and duality arises in the middle of turya, when the attention or control is lost or weakened.

By reconnection oneself to the objects and the like and finding oneself in them in the state of nonduality, the loss is regained.

In the unified state of illuminated consciousness, the yogi becomes pure and resplendent just as Shiva.

Although he is liberated from the body and bondage, he performs his bodily functions as acts of penance or worship to keep it alive.

The speech of the liberated yogi has the purity, sanctity and illumination of a sacred muttering.

The teaching of self-knowledge by the liberated yogi is a gift to the world.

He who is established as the lord in the avipa shaktis who control the avis (beings in their animal state) is the cause of knowledge and the most qualified to gift the knowledge of self.

The universe is the outflow or expansion of his own shaktis.

Preservation and destruction are also filled with his shaktis and illuminated by him only.

Even during such outward activities such as creation and destruction, the self-knowing state of the pure self remains unbroken.

His equanimity and self-knowing prevails because he thinks that dualities such as pain and pleasure are not happening to him, but external.

Becoming free thus from impurities, attachments and dualities, he remains in oneness as kevali.

The deluded one is verily a being of karma. He is produced by karma, made up of karma, guided and bound by karma.

Upon discarding duality and division, the power to manifest another creation arises.

From his own experience, the adept yogi realizes his karanashakti or the power to cause, create or manifest reality at will.

Just as he fills his consciousness (chitta) with the fourth state of turya, so should he practice the same when his mind is externally engaged with his body, senses and external objects.

Due to desires, the ignorant and deluded being (samvāhya) is outbound and moves among the sense objects of the world.

Fixing his consciousness in the blissful fourth state of turya and suppressing desires, the yogi dissolves the jiva in him and thereby the limitedness and egoism which arise from it.

Then, freed from the influence and the limitations of gross and subtle bodies, he becomes free and equal to the supreme lord.

In the self-realized state, although freed from the limitations of jiva, the connection with prana remains natural, smooth and flowing due to the illumination of nadis.

After doing samyama or control on the middle of the prana shakti in the left, right and middle nadis, what else should be done?

With the illumination of the consciousness and dissolution of the beingness, the pure-self reverts to its original, pure state again.