Hymns from the Rig Veda 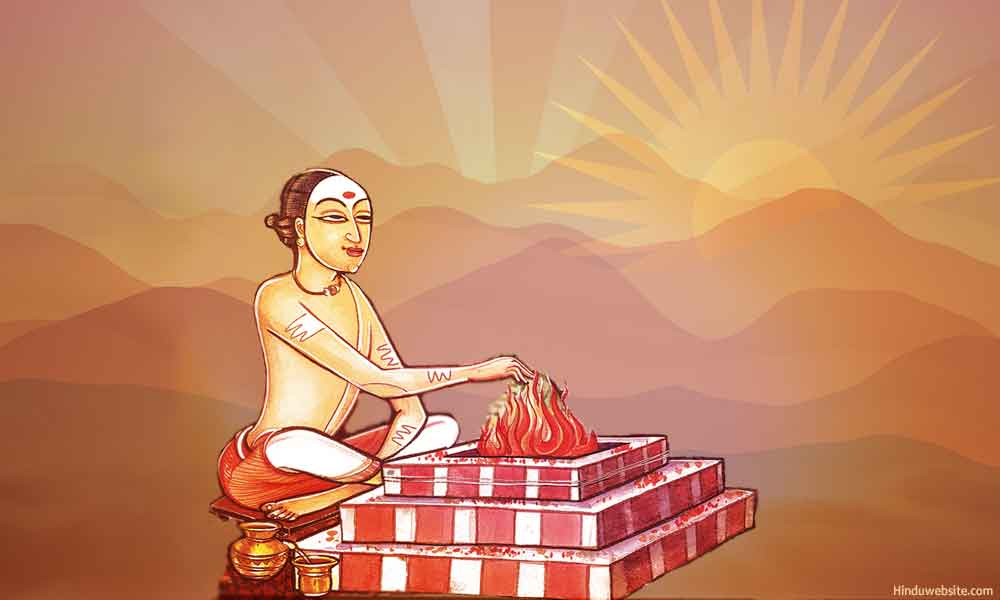 Marvelous Indra,
always to be worshipped
with hymns and salutations.
Those who desire to observe the eternal rites
and those who desiring riches
are wise enough to invoke you
and seek your presence.
Like loving wives
touching their loving husbands,
their thoughts touch you, O mighty Indra. (Rig Veda I.62)

Dawn, daughter of the sky,
rise with your riches for our welfare.
Rise with ample food.
O Goddess of the dawn,
rise and give us your wealth. (Rig Veda I.48)

Like a boat over the river,
take us across for our welfare.
O Fire, let our sins depart from us. (Rig Veda I.97.8)

The One And The Many

...They call Him Indra, Mitra, Varuna, Agni,
and even the swift winged celestial bird Gautaman.
The learned speak of the One Reality in many ways.
They call Him Agni, Yama and Matarisvan. (Rig Veda I. 164.)

O Fire, lead us to riches along the right path.
Shining God, you know the minds of all.
Separate us from the sin that moves crookedly.
Profuse words of praise we offer you. (Rig Veda I.180.1)

O Rudra, through the cures administered by you,
may we pass through a hundred winters.
Drive away from us haters.
Destroy our sins completely
and destroy the spreading sicknesses. (Rig Veda II.33.2)

We meditate upon
that adorable effulgence
of the resplendent Savitur, the life giver.
May he stimulate our intellects. (Rig Veda II.62.10)

Obeisance is all powerful.
I perform obeisance.
Obeisance is the pillar of the earth and the heaven.
Obeisance to the gods.
Obeisance wins them over.
With obeisance I rectify the wrongs,
I might have done to them. (Rig Veda VI.51.8)

O My lord Indra, do not
subject us to the rule of him
who speaks harshly and insultingly,
and who is mean and selfish.
May my thoughts be with you. (Rig Veda VII.31)

Whatever offence we
might have given to the divine beings,
or whatever moral order we
in our ignorance might have violated,
O Varuna, punish us not for such sins. (Rig Veda VII.89.3)

To the sun let your eyes go,
to the wind your life-breath.
By the good deeds you have done,
go to the heaven and then come back again
to live on the earth or take to the waters
if you are comfortable with it.
Remain in the herbs with
the bodies you intend to take. (Rig Veda X.16.3)

He who abandons a friend
who knows his duty of friendship,
has no worth in what he speaks.
What he hears is also false and he
does not know the path of righteous action. (Rig Veda X.71.6)

I take hold of your hand for good fortune,
so that with me, your husband,
you may attain to old age.
The gods, Bhaga, Aryaman, Savitur and Pushan
gave you to me for leading the life of a householder. (Rig Veda X. 85.36)

Bounteous Indra,
endow this bride
with great sons and fortune.
Give her ten sons and
make the husband the eleventh. (Rig Veda X.85.46)

Your Heart Is The Abode Of God

...Like a lotus turned downwards is the heart,
a span below the neck and a span above the navel.
Know that heart to be the abode of God.
Surrounded by nerves, it hangs down like a lotus bud.
At its end is a subtle nerve,
in which is established the Being, who is everything.
A great fire is at its center, which has
flames all around, spreading in all directions.
It is the first partaker, the ageless knower,
who digests and circulates food.
Above and below are its spreading flames.
It keeps its body hot from head to feet.
At its core lies a flame, tapering finely upwards,
like the awn of corn, yellow, bright and subtle,
flashing like a lightening in the heart of a dark cloud.
At the center of this flame is installed the Supreme Being.
He is Brahman. He is Siva. He is Indra.
He is the indestructible Supreme Being, the lord Himself. ( Excerpts from the Taittariya Aranyaka III.13)

Sharing Of Wealth And Food

The gods have given not hunger but death.
And he who eats is subject to deaths.
The wealth of the generous never decreases.
The miserly person has nothing
that can give him happiness.
The mean minded gathers food in vain.
I speak the truth, it is indeed his death.
He who nourishes neither the god nor a friend,
he who eats alone, gathers sin. (Rig Veda X. 117)

The Hymn of Creation

At that time there was neither
existence nor non-existence,
neither the worlds nor the sky.
There was nothing that was beyond.
There was no death, nor immortality.
There was no knowledge of the day and night.
That one alone breathed, without air, by itself.
Besides that there was nothing.
Darkness there was enveloped by darkness.
All this was one water, without any distinction.
It was inactive, covered by void.
That one became active by the power of its own thought.
There came upon it at first desire,
which was the first seed of the mind.
Men of vision found in their meditative state,
the connection between the Being and the Non-Being.
All gods were subsequent to this creative activity.
Then who knows from where this came into existence!
Where this creation came from ,
whether He supported it or not,
He who is controlling it from the highest of the heavens,
He perhaps knows it or He knows it not ! (Rig Veda X.129)