Hymns to Devi, the Mother Goddess 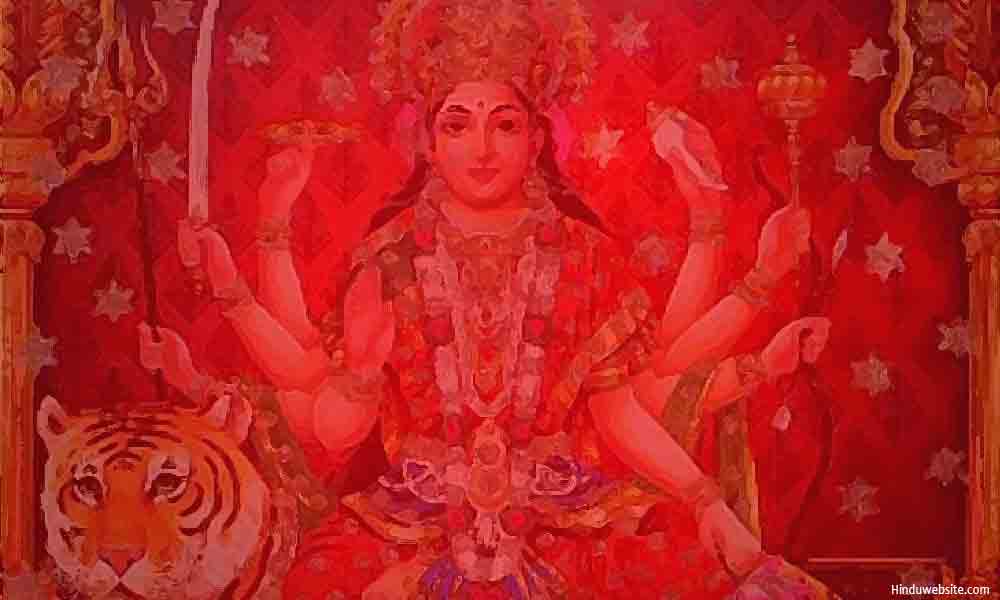 Tantra says, the Devī Tripurā is threefold, as Brahmā, Viṣṇu, and Īśa. Paraśiva exists as sevenfold under the forms of Śambhu, Śadāśiva, Īśāna, Rudra, Viṣṇu, and Brahmā. The last five are the Mahāpreta, four of whom form the support, and the fifth the seat, of the bed on which the Devī is united with Paramaśiva in the chamber of Chinthāmaṇi stone on the jeweled island clad with clumps of Kadamba, and heavenly trees set in the ocean of Amrit.

Śakti is both Māyā and Mūlaprakṛti, whose substance is the three guṇas, representing Nature as the revelation of Self (sattva); Nature as the passage of descent from Self to matter, or of ascent from matter to Self (rajas), and nature as the dense veil of Self (tamas). The Devī is thus the treasure-house of guṇas (guṇanidhih). Mūlaprakṛti is the womb into which the Brahman casts the seed from which all things are born. The womb thrills to the movement of the essentially active rajoguṇa, and the now unstable guṇas in varied combinations under the illumination of Śiva (cit) evolve the universe which is ruled by Maheśvara and Maheśvarī.

The dual principles of Śiva-Śakti, which are the product of the polarity manifested in Paraśaktimaya, pervade the whole universe, and are present in man in the svayambhulinga of the mūlādhāra and the Devī Kuṇḍalinī, who in serpent form encircles it. The Śabdabrahman assumes the form of the Devī Kuṇḍalinī, and as such is in the form of all breathing creatures (prāṇi), and in the form of letters appears in prose and verse. She is the luminous vital energy (jīvaśakti), which manifests as prāṇa.

Through the various prakṛta and vaikṛta creations, issued the Devas, men, animals, and the whole universe, which is the work and manifested form of the Devī. For, as the Kubjikā Tantra says, "Not Brahmā, Viṣṇu, and Rudra create, maintain, and destroy, but Brāhmī, Vaiṣṇavī, Rudrāṇī. Their husbands are but as dead bodies."

The Goddess (Devī) is the great Śakti. She is māyā, for of Her the māyā which produces the samsāra is. As Lord of māyā, She is Mahāmāyā. Devī is avidyā (nescience), because She binds; and vidyā (knowledge), because She liberates and destroys thesamsāra. She is Prakṛti, and, as existing before creation, She is the ādya (primordial) śakti. She is the vācaka-śakti, the manifestation of cit in Prakṛti; and the vācya śakti or cit itself. The ātmā should be contemplated as Devī. Śakti or Devī is thus the Brahman revealed in its Mother aspect (srīmātā) as creatrix and nourisher of the worlds. Kālī says of Herself in Yoginī Tantra: "Saccidānandarupāham Brahmaivāham sphuratprabham." So the Devī is described with attributes both of the qualified Brahman, and (since that Brahman is but the manifestation of the Absolute), She is also addressed with epithets which denote the unconditioned Brahman.

Hymn to the Goddess Bhuvanesvari

Tharashtakam, a Hymn to Goddess Thara

Source: From the Hymns to the Goddess by John Woodroffe (Arthur Avalon),1913. Readers please note that this is not an exact reproduction of the original text. We have made some changes to it and also added Sanskrit text in some cases. While we have taken every care to reproduce the original text in parts, we cannot guarantee its accuracy orauthenticity. Please check original copy for accuracy, study and research.